In Season Two of V, it’s become pretty clear that the alien Visitors, lead by Morena Baccarin’s stern Anna, do not have the best interests of humanity at heart. What the Vs do have is an enormous amount of high-tech weaponry. Standing against them are a small group of mixed humans and Vs known as the Fifth Column. Joel Gretsch plays Father Jack Landry, a key member of the Fifth Column whose faith is powerfully tested by both the existence and actions of the Visitors.

Gretsch is something of a genre veteran – he was in the extraterrestrial miniseries TAKEN and on THE 4400 from 2004 through 2007 – but playing a man of the cloth calls for a new perspective, he says at a party thrown by ABC at the Pasadena Langham Hotel for the Television Critics Association. Here’s what he has to say about the evolution of Season Two. 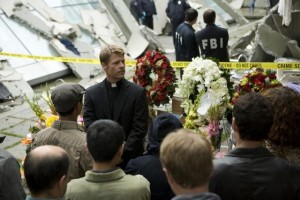 ASSIGNMENT X: Did you do any research into either priests or freedom fighters to play this role?

JOEL GRETSCH: I actually did a lot. I thought it was very fascinating how someone becomes a priest, because it’s not easy to become a priest. They [people in the Church hierarchy] question you a lot, if you’re ready for this commitment, and that goes on for some time, and to devote yourself to a belief of a higher power and the question of faith is such an intangible thing. I remember saying a long time ago to my mother, “Mom, I’d have more faith if I would see more evidence.” And she’s like, “Well, that’s the opposite of faith – faith is having it without having the evidence.” And it’s so hard to do that.

AX: How does Father Jack view the Visitors in terms of proof of God? Are they a big test of faith?

GRETSCH: That was the question that was proposed in the pilot for Father Jack. Becoming a priest, there’s a lot of research. There’s a lot of studying you do of the Bible and there’s a lot of research. And so the Vatican is telling him that every creature is God’s creature. Well, okay, [the Visitors are] not in the Scriptures. This is not what I’ve ever read about. So this is a departure. You’re just telling me this. And then the reveal, the first time out that they’re not here with good intentions – everything gets thrown. Jack’s world is upside-down.

Everything that Jack thought was one way is the opposite way now. And it’s challenging. It’s also, for someone who has devoted himself his whole life to the Church, now he has to go against the Church, because of all the information that’s been [discovered], and also the circumstances. The circumstances are huge. The obstacles are huge. Anna’s here for bad reasons and the demise of mankind. Jack has to do something about it. He has to be a fighter.

AX: At this point, does Jack think he’s fighting for God, or does he think God has stepped away, or is  this a challenge to his faith altogether?

GRETSCH: I don’t know. I show up, I hit my mark – no, I’m kidding. There’s so much going on in this season that there isn’t a lot of time to question those things. Every episode has so many things getting tossed everybody’s way, and I’m part of the Fifth Column. We’ve got to figure out what we have to do to stop Anna. Now, his belief in what God [wants] is more of a private moment, but I think Jack’s working that out as we go.

AX: How does Father Jack reconcile his beliefs with the increasingly violent actions taken by some of the Fifth Column?

GRETSCH: Well, what was revealed about Father Jack in the first season was that I’ve done two tours of Iraq, so I’ve been around war before. I’ve seen casualties. We’re at war again with Anna. And there are going to be casualties. We don’t want to be flippant about it. I think Jack’s caution to the Fifth Column has always been, “Wait, we have to look at what we’re doing. We don’t want innocents to be killed in this.” And unfortunately, through this season, there are going to be casualties that are unavoidable. And that is the dilemma that Jack has to reconcile with. It’s not easy. It’s a very difficult thing to reconcile.

AX: There’s also a question being raised on the show about whether the Visitors have souls …

GRETSCH: [Whether one is] religious or not religious, if you’ve ever seen somebody or had somebody die, a loved one – my grandfather passed away – you could tell that something left. Now, that comes in question with Anna. The Vs are different than humans. That’s a wonderful thing that the writers kind of wove into this season, that aspect of it. Not just from a religious standpoint – it’s kind of innately I think who we all are as humans. 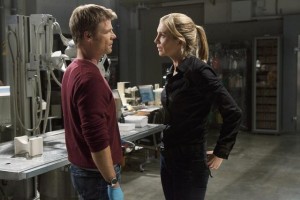 AX: What would you say Father’s Jack role is within the Fifth Column?

I mean, Elizabeth Mitchell’s character is being challenged with her son and how he’s started to go over to the Vs. Now, if it’s hard not to react from a human standpoint when someone you love is being pulled away like that. Jack has to go, “Whoa, whoa, whoa, we can’t be flippant about this.” But she’s going, “They took my son!” And she’s reacting [as] a mother who would do anything for her son. But I’ve got to look at the whole scope of who else is involved. It’s a very complex, wonderful conflict that we have in the show, where we’re working as a group, but when it becomes personal, it’s hard not to be reactive from a personal standpoint.

AX: We know Marc Singer, a veteran of the original V series, is coming on this season as a freedom fighter. Given that the two of you look somewhat similar, are your characters going to be related in some way?

GRETSCH: Stay tuned. I don’t know. I mean, it’s great. When I saw Marc on the set, I made a beeline to him. I wanted to talk to him and say, “How does it feel to be here?” He was so great. He seemed proud of the fact that [he was part of] the V from the past and now being there and excited about going to the set and do the scene and he was wonderful. I can see why [original V creator] Kenneth Johnson, what he did a long time ago, was genius. When the cogs in the wheel all fit and they all work, from Jane Badler [Diana on the original series, Anna’s mother in this version] to [Marc Singer] – it was a great group of people who did the show together back then and it all worked.  And he was a wonderful peer and I really enjoyed talking with him and being with him.

AX: Do you have a favorite scene or episode you’ve gotten to do in the two seasons so far?

GRETSCH: Yeah. I love working with Elizabeth Mitchell [as Erica Evans] and Charles Mesure [as Kyle Hobbes]. Morris Chestnut [as Ryan Nichols] is just a fantastic guy. I think a lot of the Fifth Column stuff has been great to work on in that capacity. But I’ve got to tell you, my favorite scenes are really with Chad Decker, [played by] Scott Wolf, in the church. Scott Wolf is intensely intelligent and he’s got a mercurial, passioante kind of mind. We talk about scenes before we do them. We’re very methodical, we have the same kind of take on things and it’s fun to be able to be that creative with him when we get to do a scene. So all that stuff in the church, when he comes to me, I love those scenes.

GRETSCH: Thank goodness for modern technology. When you email [show runner] Scott Rosenbaum, he emails you immediately back. So there’s never a time when you’re waiting without information. That’s been great. It’s just great seeing him because I like him, he’s a good guy and to be able to email.

GRETSCH: Yes. I was actually putting something together just before the holidays. It’s a wonderful independent film – some friends of mine are putting together a story that I’ve believed in a long time. So we’ll see where it goes.

AX: Is this something that you’ll star in?

GRETSCH: Yes. And direct, actually. All of us actors have a part of us that wants to direct.