Producers Jack Rapke and Steve Starkey have worked with Robert Zemeckis for a very long time, and they’ve seen how that director as pioneered the art of “performance capture” films from POLAR EXPRESS, BEOWULF and A CHRISTMAS CAROL.

Now, they’re working alongside Zemeckis as a producer for the Simon Wells directed MARS NEEDS MOMS (opening Friday). An adaptation of the Berkeley Breathed children’s book, the film follows an average kid named Milo who has to save his mom from manipulative aliens (but he has to travel to Mars first).

In our exclusive interview with the producers, the producers chat about the performance capture and 3D process and where they see 3D heading.

ASSIGNMENT X: Do you ever miss live-action, after doing so many performance capture movies over the last several years?

JACK RAPKE: It’s been driven by the material, because we had a studio [Image Movers Digital] and we were looking for material we could do with this studio with performance capture arts. There was never missing it or a lament for live action per se, because we had these stories we wanted to tell that were unique and required performance capture in terms of technique. Whatever the material dictates, that’s what we’re excited about and it will dictate whether it’s live action with a blend, whether it’s green screen and whatever filmmaking technique is available to us. But it will always be driven by the stories we want to tell.

STEVE STARKEY: Live action has an energy that you sometimes reminiscence about and think “that was really fun.” There is a certain unique camaraderie that comes from working on live action sets that is special. You make movies, and return to the next one, and the same group of people come together – the pulling together of those people and traveling down a new road on a new film. I miss that kind of aspect of things, but what I don’t miss is shooting WHAT LIES BENEATH when it’s about 38 degrees in New York, all night for a week to shoot a bridge sequence and crashing a car into water. I would rather go on a mo-cap stage and be all cozy. So there are aspects of it that make you nostalgic and there are realities of live action that make you sort of sigh with relief.

AX: Why couldn’t you do MARS NEEDS MOMS, live-action?

STARKEY: You could, but you know what it would be, it would be an almost entirely a digital green screen show. If you break the movie down, and say, “we’re going to do this live-action,” usually one of the first things you do is casting and then break down the movie into sets that you’re going to build, locations and what will become artificial environments because they don’t exist yet. Except for finding a house in Simi Valley to shoot the opening of the movie, the entire rest of the movie would be a green screen show on a stage instead of mo-cap. What’s the difference? It’s like the STAR WARS technique if you will. The only real thing was the two actors with fake swords in their hands on some green screen set – the rest is painted. In those great spaceships of George Lucas’, none of that exists. They don’t even have the artificial reality that we had to give our actors so they had a sense of what the set was. So, you would be incapable of making MARS NEEDS MOMS, unless you did it fully digitally anyway.

AX: Is it inexpensive to do it this way?

STARKEY: But it’s not inexpensive to do it the other way either.

AX: Is there a middle ground?

STARKEY: Yes, there is. I guess, maybe MONSTER HOUSE, there could have been, how do you bring the element of those into the story without it being some digital version. The movies we’ve chosen, like BEOWULF, it’s a character that doesn’t exist. There’s no six foot six, perfect specimen of a guy who could act.

RAPKE: In MONSTER HOUSE, if we had done live action with the kids, how in that reality are you going to accept a house going off its own foundation. If you stylize that whole thing, you can take the house off its foundation.

STARKEY: That’s the trouble. If you look at the stylization of A CHRISTMAS CAROL, you have Scrooge with these long fingernails, this raven nose and that is a style the director saw in his head and it doesn’t exist in real life. Right away, it’s an impossibility.

AX: How do you feel about 3D and what are the necessities of making a great 3D film.

What we do believe that is if you originally conceive the movie as a 3D movie and you make the movie in three-dimensions to begin with and you have a filmmaker who is using the 3D space in an elegant smart way to tell the story, then that is the best way to use 3D. Because of 3D, there is a premium on the ticket price, which there is a push back from the audience, because we’ve had so many bad conversions. Some have been good, but there have been some bad conversions or subject matter that has no business being 3D except for somebody to reap the trend reward of the higher ticket price. And we believe that’s going to kill the golden goose. Not all projects are 3D and if you’re going to do 3D, do it from the inception and do it properly.

STARKEY: It’s like going to an amusement park, and you go, “I’ve plucked down $20 bucks for my kids, and you know what, this amusement park is not great, it’s the B-version of an amusement park.” We want people to put their money down and go, “That’s why I go to a 3D movies because of a film called MARS NEEDS MOMS.” I know there are a lot of other movies where you put the money down, you go, “what the heck was that, they could have had it in 2D and it would have been fine.”

RAPKE: In 3D cartoons, there are the visual gags of the spear coming into your hand, where you break the plane and come out to the audience as a gag. If you overuse that, that’s bad filmmaking. You have to use it appropriately. It’s about a filmmaker envisioning the movie in 3D in an elegant way. 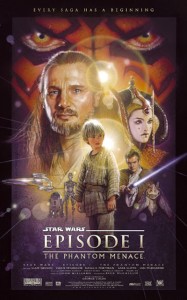 AX: Steve, you worked on EMPIRE STRIKES BACK and RETURN OF THE JEDI as an assistant editor. Does it excite you to see those movies being converted in 3D especially with THE PHANTOM MENACE coming out first next year?

STARKEY: I’m excited to see what ILM and Lucas do with a real painful, artistic conversion. To date, I have not been a fan of conversion. I think they’re a fake form of 3D. AVATAR, CHRISTMAS CAROL, MARS NEEDS MOMS, these are the great 3D films to date. I haven’t seen great conversions, but I’m anxious to see what Lucas and ILM do. He’s a painstaking technician. He has an artistic genius and so do those guys. If it can be done great, it will be done on that movie. I think that’s probably going to become the benchmark conversion in 3D that’s been done to date.

AX: We’ve heard about Universal wanting to do a BACK TO THE FUTURE sequel for years, I’m curious, why do you feel the original has stood the test of time and is it possible to do a sequel to it now?

STARKEY: I think everything that needs to be said, has been said. I think it was a perfect trilogy. I think it was a movie that’s been done in its time. That movie lived in the time period it was made. There was a charm and excitement and a style to it. I can’t imagine it being done today. The reason it survives, is because of the strong emotional themes that were in the core of the first movie, where in each of the sequels it repeated.

STARKEY: The very first script, you could teach in film school, it’s so perfect. The charm of it, it had it’s day, just let it rest.