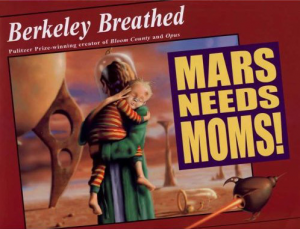 MARS may need moms, but it also needs moms who also happen to be screenwriters.

In adapting Berkeley Breathed’s children’s book, the story took on a whole new life, expanding the universe, aging things up a bit and uncovering even more comedy in the process. The film was also done in the same “performance-capture” technique that’s been previously used by director Robert Zemeckis on THE POLAR EXPRESS, BEOWULF and A CHRISTMAS CAROL (here he serves as producer).

The story follows Milo (Seth Green), a precocious young boy who wishes he didn’t have a mom (Joan Cusack) only to have Martians abduct her one night in order to use her mommy-rearing skills to help Martian babies. Hitching a ride on the ship, Milo must now save his mom with the assist of Gribble (Dan Fogler), a former earth kid (now grown-up) stranded on Mars too and friendly alien rebel Ki (Elizabeth Harnois).

Wells spoke to ASSIGNMENT X about the evolution the screenplay, working with her husband and how children’s literature has changed over the years.

ASSIGNMENT X: Traditionally, animated films are really mean to moms. They either die or they’re really mean – so how were you going to rectify it with MARS NEEDS MOMS?

WELLS: I think, in a way, I was attracted to this, because as a mom, it’s always difficult not to lecture your children and bash them over their head with “this is what you should be doing.” And you could see them glazing over and switching off – they’re not hearing you. This is the perfect opportunity to indoctrinate my children, whilst making them feel like they’re having fun and watching the movie. The whole thing feels like a great romp, but I’m actually sneaking in a great message there.

AX: Do you think Martians stealing away moms might traumatize some children?

WELLS: You look at the literature that’s out today. In HARRY POTTER, Harry loses two parents and he never gets them back. While we were writing, my daughter who was eight at the time, she was devouring PERCY JACKSON AND THE OLYMPIANS – THE LIGHTENING THIEF, which I loved. We were reading it together. Percy Jackson discovers he’s this hero, and his mom dies, and he has to go to the underworld to save her. I thought this was a parallel. We were writing a movie that is similar to this. It’s out there in the ether, people are responding to this kind of story. I felt we were kind of vindicated, because it’s something children are interested in. 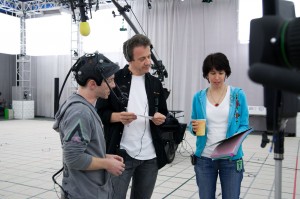 AX: You’ve mentioned that you went in to pitch the story three different times to Robert Zemeckis. What were those first two pitches, and what did it take to finally break the story to get the go-ahead to write the movie?

WELLS: Looking at the book, it reads very young, because obviously Berkeley wrote it for very young children and we took that as our first jumping off point. The original pitch was very young and the Martians were not very frightening or scary. We pitched this to Bob, and he felt the whole thing was very safe and he said, “not so much.” So we went back and wrote something similar, where the Martians were using cell phone and drinking coffee at Marsbucks and Bob said, “ahhh, no.” And he said, “don’t give me a standard animation script. These are the first ideas you come to while looking at the book. Also, a lot of animated movies are like that and some of them work very well.” Then he said, “I don’t want to make one of those movies, I want something different.” So he said, “pitch me something different.” We thought, if we’re going to strike out, we’re going to go out in flames. So we came up with the story we wanted to write, we pitched it to him, and he said, “okay, let’s make a movie.”

AX: What did your kids think of the film? Did they get the message?

WELLS: Yes. They see a lot of our interaction with them in the movie as well.

AX: How was it writing with your husband?

WELLS: We’ve been married forever, so we found a way of arguing about things without offending each other. We can criticize each others ideas, without crushing each others egos. Because we’ve been together for so long, we think the same way and love the same sort of movies, but also, we go home together, and the children are there, so it’s a different world and a different life. You leave the office, the office is where you do your work, quite frankly, and children drive you crazy, but they keep you sane and force you to focus on family issues and forget about the work issues. 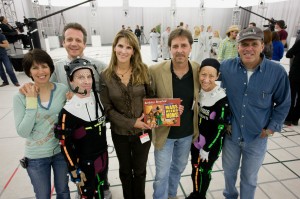 AX: What did Robert Zemeckis bring to the table story-wise – he’s a phenomenal writer in his own right.

WELLS: He was very influential and I got to work for one of my all time heroes. Both Simon and I met out of college. We went to film school and we went to see BACK TO THE FUTURE and said, “we want to make that movie, we want to work with that guy.” So when we got this opportunity, it was like angels calling. It was fantastic. Bob was great, because he’s a filmmaker and a writer himself. He’s very generous. While he’s there picking away at your third act, and the whole lot is crumbling around your ears, he still manages to instill you with this love of the process and this enthusiasm to build it up and make it better. He would say, “just because the third actor collapses again, it’s great, we get to rebuild it.”

AX: What was wrong with the third act you had to fix?

WELLS: He actually said, “it’s arbitrary. We’re on this roller coaster ride and the characters are running.” And we asked, “what do you mean arbitrary?” He said, “In  BACK TO THE FUTURE, you know where Marty has to get to, and know exactly what time he has to get there.” In the current third act, which was Draft 5, they were just running. He said, “they’re running, until you tell me that we’ve stopped” and he says, “you have to have a deadline, you have to know when you have to get to it.” That’s why we put the whole sunrise thing in there – you can’t stop the turning of the tides.

AX: Since this was going to be animated and not live action, did you have to concern yourself with how big it can be while writing?

WELLS: Since it’s an animation process, you can go to Mars and go to an alien planet, spaceships and big explosions – whatever you want. We wrote the story we wanted to tell in the environments we wanted to tell it, and then we took it to Image Movers Digital and those fabulous group of animators and said, “this is the story and movie we’ve got, this is the amount of money we have to spent, you tell us how good it can look.” They said, “we’ll see what we can do.” Then they said, “Fur is really expensive. Long hair is really expensive and water is really expensive and shiny things are really expensive.” Lo and behold, they came back with something that looks absolutely fantastic and that’s all due to them.

AX: How would you describe the movie as a mom?

WELLS: We wrote this with the idea of indoctrinating something good in there for our kids – a nice wholesome message. So many movies now go, “oh, parents are stupid and kids are smart” and I resent that, I’m not stupid, or at least I don’t think I am. Why can’t families go see a movie together? We wrote this so a family could go out together and have a fun time. Some times I take my kids to see movies and I could fall asleep. I hope parents take their kids to it and everyone has a great time. This is something we wrote hoping parents would laugh and cry and they would all come out of it with something to talk about. Bring the family together and hopefully they’ll have some fun.