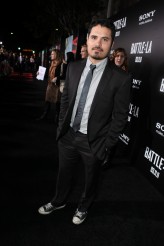 After playing military men for so long, he gets a chance to be a civilian for a change 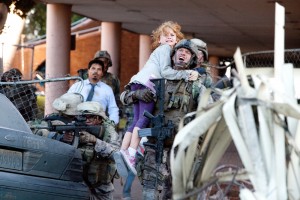 Having played soldiers in the past in many project, Michael Pena relished the opportunity on the new alien invasion flick BATTLE: LA to play a civilian, valiantly trying to save his son from becoming collateral damage with Los Angeles under siege.

In an exclusive interview with ASSIGNMENT X, Pena spoke about his new role, why BATTLE: LA (which opens Friday) is so different from other alien invasion films and talks about his upcoming action-comedy TOWER HEIST from director Brett Bratner and starring Ben Stiller and Eddie Murphy.

ASSIGNMENT X: You were one of the actors who didn’t get to go to boot camp, because that wasn’t part of your character – were you a little envious of the others?

MICHAEL PENA: A little bit. I think it affected the ego more than anything. Everyone is shooting a round. You have Michelle Rodriguez rolling in the dirt, and here I am with a tie on trying to hide. It was hard on the ego and it seemed like all the kids were having fun and I was at the windowsill looking, and putting steam on the window going, “wow, I wish I could do that.” I’ve played soldiers for a little bit now, so it was kind of nice to be in a movie like this and be one of the civilians.

AX: Sometimes though you need an emotional anchor in a big, noisy film like this, and your character provides that.

PENA: I think one of the reasons I wanted to do this movie, it’s not the biggest part in the world, but it’s also very surprising. I chose it because I enjoyed the emotional anchor of it, as you say. Even when I meet Nantz (Aaron Eckhart), I bust a little corny joke about my kid, just to make my kid laugh.

AX: Now that you have a kid of your own, did it make you more protective of your on-screen kid?

PENA: It teaches you as an actor to not be selfish. It helps in being interested in something, as opposed to being interesting. I cared for him. I would jump in front of a bus if it was between me and him. It’s really interesting. It’s one of the things you don’t know until you’re actually there, but I used it for my whole motivation for the movie, just to be there for my kid.

AX: There are so many alien invasion movies, how do you describe this film to others?

PENA: It’s a fast-paced entertaining movie. It actually leaves you a little time to breathe. It’s a good movie. I saw it yesterday and I was thoroughly impressed.

PENA: I have THE LINCOLN LAWYER, 30 MINUTES or LESS in August and TOWER HEIST in November.

AX: How insane was TOWER HEIST with all those actors – Ben Stiller and Eddie Murphy?

PENA: [Director Brett] Ratner keeps a pretty tight set, but it’s hard not to laugh when Eddie Murphy is doing his thing. Ben Stiller also cracks me up. He has my funny bone. He’ll do some little subtle thing that he thinks he’s funny and he’ll  crack me up. I don’t know if he ever complained about it, but I definitely messed up his takes.