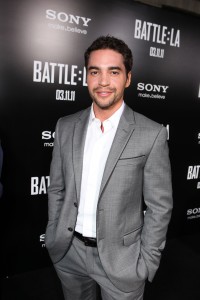 Most actors prefer the perks of being a star, but for Ramon Rodriguez he enjoys the hard work that goes into the role.

In BATTLE: LA, he had the most strenuous experience to date playing 2nd Lt. William Martinez who finds him and his Marine platoon knee-deep in an alien battle against Earth. He not only had the chance to prepare by going to boot camp prior to filming, but he gained an even bigger respect for the military once the project was through.

In this exclusive interview with ASSIGNMENT X, Rodriguez talks about his role, as well as looking forward to his next project – a TV reboot of CHARLIE’S ANGELS where he’ll be playing a rebooted Bosley.

ASSIGNMENT X: Did acting in TRANSFORMERS: REVENGE OF THE FALLEN help you prepare for BATTLE: LA, in terms of big scale action?

RAMON RODRIGUEZ: Yes, it did. It’s a nice warm up for this. By the time I got to this, I did feel like I’ve had this experience before, I got it under my belt and I knew how rigorous it was going to be. This is different because of the content and what it’s about, but different in terms of the character and daily routine. The gear we wore was about forty pounds and [we shot in Louisiana] and It was really hot. It was a different experience – equally as intense, but in a different way.

AX: Can you talk about the boot camp you did before starting filming?

RODRIGUEZ: It’s important that you don’t look stupid. You’re not going to look like a Marine, so the boot camp was priceless. It was a valuable experience for everyone. It was not the actual Marine boot camp which was what I was expecting. I prepared before I went in there, thinking it was going to be that. I had friends in the Marines, and I watched documentaries on boot camp training – it’s really intense. We did not even a quarter of what it’s really like. It was intense and a good workout. I think more than the physical, it was more about the mental – getting in your mind what it’s like to be a marine, carry your weapon and looking proper and how to reload and walk and talk – how to move as a team. And the bonding is probably what superseded everything else. Everybody fell into character during that process and it was cool to watch the evolution. From beginning to end, people were finding themselves and finding their roles and rank.

AX: Since the film was shot documentary style, that must have also put you into it too, since it’s a different kind of filmmaking energy.

RODRIGUEZ: In any of the action stuff where you see us running – we’re doing it full on. I was running full out. I was diving and rolling – that’s why injuries were happening. Even more, when I see my cameraman holding the camera doing what I’m doing, he has to run behind me or in front of me, so I give it up to those guys carrying that equipment and doing everything we were doing. And they had to do it with that heavy camera and making us look good all at the same time. They were really superb. It was a challenge. 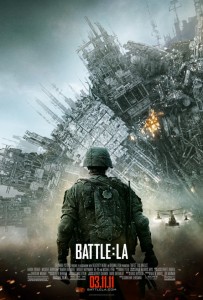 AX: Did you have more respect for your buddies in the Marines, after going through this process?

RODRIGUEZ: I would call them up and tell them my experience. They wanted to know. “Did you do this or do that in boot camp? Did they put you down and crush you?” It was physical, I thought it was going to be tougher, but it was good. Now we can have Marine conversations because I have a little more knowledge. I already had respect for our soldiers, obviously, but I have a whole new respect in terms of the physical – except they’re doing it for real. There’s no way you can explain that, learn it or read about. Going to war, there’s only one way to find out. We didn’t go to war. We had a set, but it made me appreciate what our guys and girls are going through.

AX: You’ve said that you treated the aliens as “enemies” in your head when you shot the film, rather than “aliens.”

RODRIGUEZ: When we’re at our base [at the  beginning of the movie], and just before we’re being sent out, they’re not introduced as “we have aliens that are coming in.” No, “we have an enemy force.” I just love the idea that this is how military handles it. Even now, we have to label things, and you almost try to make them not human, so you make them the “enemy” and you’re trained that way. Plus, we don’t know what or who they are. It’s just an enemy force and it makes it very black and white. We have to take them out or save people – that’s it. That’s what we’re there to do.

AX: I’m sure the script was really dense, but it’s interesting to see that there isn’t a ton of dialogue in the film – which also lends the film and even greater air of authenticity.

RODRIGUEZ: I think that’s what makes it real. Chris Bertolini wrote a strong script, but he was also adjusting with the process as we were filming. He’d be tweaking things, tweaking moments and adding scenes, but in terms of the real sense, if you watch documentaries they’re not having conversations in the battlefield about what happened back at home. They’re focused on the mission on what has to be done. Hopefully this movie captures that.

AX: Did they have the creature designs before you started?

RODRIGUEZ: For the most part, they kind of were figuring out the spaceships and the whole bio-mechanical make-up. When I was in boot camp, they took me to this stage where they were building them. I got to see the approximate height and they had one alien created where we drag him in and dissect him to figure out what they’re made of.

AX: How would you describe this movie to your friends?

RODRIGUEZ: It’s a movie about what it would really look like if aliens came here, I don’t think much more needs to be said. That to me is what drew me to this. You’re also seeing this through the eyes of the military and it has this emotional through-line that seems to be missing from most action movies.

RODRIGUEZ: I just got a new draft and I’m starting to see Bosley reformatted. It’s nerve-wracking, because I’m messing with the character that people have memories of. He’s a known character. We’re doing a whole new twist on it and that’s the exciting thing.