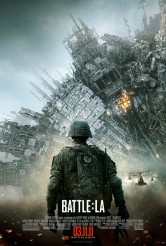 Aliens! U.S. Marines! Los Angeles! Stuff blowing up every fifteen seconds! Booyah! Good for what it is

In BATTLE: LOS ANGELES (aka BATTLE: LA), Planet Earth is suddenly under attack in twenty different seaport cities around the globe. As the title suggests, we’re in Los Angeles, present day, where a platoon of U.S. Marines try to get across the city with some civilians in tow, while simultaneously fighting the well-armed invaders.

Nobody can accuse director Jonathan Liebesman and writer Chris Bertolini of dragging their feet. BATTLE opens with alien ships streaking around the city skyline, blasting away and leaving big fiery wreckage. There’s a brief flashback to 24 hours earlier, with Marine Staff Sergeant Michael Nantz (Aaron Eckhart) turning in his resignation papers at Camp Pendleton, even though his commanding officer would rather he remain with the Corps. Then what’s thought to be a meteor shower turns out to be UFOs and Nantz is asked to stay on through the crisis. Nantz is attached to the unit commanded by Second Lieutenant William Martinez (Ramon Rodriguez), who instinctively keeps looking to the older, more experienced battle veteran for direction.

This aspect of the story, along with some of the men having qualms about Nantz having previously lost men in an overseas ambush, is what we get in terms of character development and non-combat-related plot. This part of the film doesn’t work dramatically as well as seems intended – it gets to the point where when Eckhart says gravely, “But that’s not important right now,” we half-expect to see Leslie Nielsen to comment about big, square buildings full of patients.

To counter this, the actors give it everything they’ve got, which is a great deal, especially in Eckhart’s case. Damn if he doesn’t make us believe that Nantz is a real man, still in agony over his self-perceived failures, yet the soul of commitment so long as he’s on active duty. As an Air Force officer who winds up with the Marine unit, Michelle Rodriguez is effectively tough and sarcastic, and Ramon Rodriguez convinces us that Lt. Martinez is scared to death and determined to do his duty at the same time.

The main reason for BATTLE: LOS ANGELES’ existence, however, is to blow stuff up, which is done with proficiency, a fair measure of suspense and extraordinary frequency. One reason the sometimes clunky dialogue doesn’t grate too much is that it doesn’t matter much next to all the howls, screeches, thumps and booms that accompany it. We get big ships, little ships, big aliens, people-sized aliens, missile fire, bomb strikes, flaming death rays, flipping cars – if it’s some kind of havoc that can be caused by weaponry in an urban environment, it’s in here somewhere. The aliens have a cool, squishy design that makes them suitably unearthly and menacing, and the situation is sufficiently dire that, as we hurtle from one encounter to the next, we always wonder what we should be wondering, namely, “How are they going to get out of this?”

There are shots in which native Angelenos are going to wonder how the heck our characters made it from Point A to Point B, as the movie was actually shot in Louisiana and sometimes seems a little confused about specific geography. Some shots also have the pixilated look of less-than-ideal video transfer.

On the upside, when the Marines go into darkened corridors, not knowing what they may find, we’re reminded of ALIENS in a good way. The film is also a safe way of creating an ode to the dedication and prowess of the U.S. armed forces without dehumanizing any other country’s fighters. It could be better (particularly in some of its dialogue), but on the whole, BATTLE: LOS ANGELES is a good example of its genre.