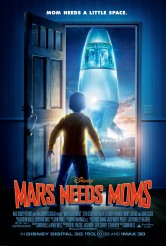 MARS NEEDS MOMS is the latest CGI offering from Walt Disney and Image Movers Digital (who were responsible for the performance capture films THE POLAR EXPRESS, BEOWULF and A CHRISTMAS CAROL).  I have had to warm to the slick almost real style of motion capture animation. Sometimes it really works for me, and other times it’s so natural/unnatural looking that I get put off by it. Thankfully, it worked for me both in terms of story and animation with MARS NEEDS MOMS.

MARS NEEDS MOMS is based on the story of the same name written by Berkeley Breathed (the creator of BLOOM COUNTY) and follows young kid Milo (Seth Green) and his mom (Joan Cusack) on an unlikely adventure to Mars. Mom is such a great disciplinarian that she is kidnapped by Martians to be reduced to vapor and program their nanny robots with her essence. See, Mars has no parents. All of the children (the girls at least) are raised by robots and become functioning members of an almost dictatorship society. Milo ends up a stowaway and on Mars befriends a human named Gribble (Dan Folger) and a Martian Hippie Girl named Ki (Elisabeth Harnois) who aid in the rescue of his mom.

The odd thing about this movie is the mixed message that it sends small children. If you are a well-behaved kid, and your mom is a great mom, you stand the chance of having her abducted by aliens and whisked away to a horrible fate. Kids who can’t separate movies from reality yet, might actually be terrified by this film. Then there are the kids that might take away from this that they should misbehave so that their moms aren’t Martian targets. It’s sort of a mixed bag.

The characters in the film are easy to love and care for in the film. Milo and his mom are very real and most people can easily see themselves at that age. And probably more than one of us can remember horrible things we said to our moms that we still wish we could strike from the record.

Gribble (Dan Fogler) is an interesting character,  but in the beginning he’s a little too amped up and it took a while to warm to him. Ki on the other hand is a thoroughly enjoyable creation and I loved her free love and peace driven attitude.

Of course  The Supervisor (Mindy Sterling) turns out to be a nice adversary just because the character is so nasty.

The 3D is top-notch, much better than other animated films of this kind – it’s actually used to enhance the story.

As an adult viewer I did really enjoy the film. The movie is touching and exciting with the right blend of humor, sadness, and action. The animation is slick and life-like and thoroughly enjoyable. And mixed messages not withstanding – all in all this is another movie that the whole family can enjoy.