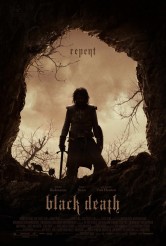 A powerful, dark tale of witch-hunting in the plague-ridden fourteenth century

To compare or not to compare? There’s a particular genre movie that BLACK DEATH brings to mind, but will naming it give the game away, or indeed lead readers to wrong assumptions about the new film? Since the subgenre of Christianity vs. paganism is relatively small, let’s say there are some thematic similarities to – along with striking differences from – the original WICKER MAN (put the miserable remake out of mind). Director Christopher Smith (who also did the wonderful SEVERANCE, though little of that film’s dark humor is present here) and writer Dario Poloni give us a medieval world drenched in atmosphere, plague and violent religious conviction on all sides for an intense, sobering experience.

It’s 1348, and bubonic plague, aka “black death,” is wiping out half the population. Even a cloistered monastery is not safe, as one of the monks passes away from the disease. Young novice Brother Osmund (Eddie Redmayne) is released from quarantine when he is found to be healthy. Osmund is devout, but also secretly the lover of beautiful Averill (Kimberley Nixon). Fearing that Averill may catch the plague if she stays in town, Osmund sends her away to the forest, where she hopes he will leave the church and meet her. Osmund prays for a sign that he may serve God without having to remain in the monastery.

The arrival of a party of witch-hunters, sent by the local bishop and led by stern, devout Ulric (Sean Bean), would seem to be the answer to Osmund’s prayer. The group requires a guide through the forest to lead them to a village which is rumored to be plague-free and therefore doubtless under the Devil’s protection. Despite warnings from the abbot (David Warner) about what sort of people he’s joining, Osmund volunteers for the job – though he starts to have his doubts soon enough.

A village is found, all right, and its residents are indeed healthy. What happens there is in some ways exactly what we expect and in some ways shocking. Although the violence factor is extremely high, this isn’t a splatter-fest – the gore is successfully horrifying. BLACK DEATH turns out not to be just about how righteousness can beget intolerance and monstrous abuse of power, but also about exactly how people become invested in their beliefs and how sometimes the present is forced to justify the past. By not taking sides and not lecturing, it leaves the viewer with a lot to consider.

The main characters are all multidimensional, with no one immune from either kindness or darkness, which makes the tale all the more compelling. Redmayne has great heart and is very credible as a man struggling to reconcile his personal morality with what he sees in the larger world. Bean’s Ulric in a different rendition of the story would be a hero, and he does have heroic qualities along with the ruthlessness that makes him so dangerous. John Lynch quietly comes to register as a relatively sane member of Ulric’s band and Tim McInnerny is avuncular as the village leader. Carice von Houten, as a healer with a very good grasp of how society works, is seductive and intelligent with a very human temper.

Director Smith, cinematographer Sebastian Edschmid and production designer John Frankish are all to be commended on BLACK DEATH’s look and feel. The film was shot largely in Germany’s Sachsen-Anhalt region and everything in view persuades us that we are indeed in fourteenth-century Europe, with danger and mystery lurking around every tree and every gaping cave mouth.

BLACK DEATH has all the makings of a cult film – if it gets an enduring following, it will be well-earned.