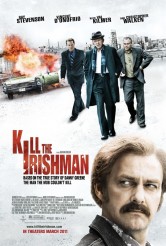 According to the press notes on KILL THE IRISHMAN – and there’s no reason to doubt them – 36 bombs went off in Cleveland during the summer of 1976 alone, courtesy of a ferocious gang war. These days, who remembers or ever knew organized crime was that active and that angry in the Midwest?

Rick Porrello, now a police chief in a Cleveland suburb, wrote TO KILL THE IRISHMAN, a book about those tumultuous days and their far-reaching fallout. The end result of the story is reduced to a postscript in KILL THE IRISHMAN, which focuses on Danny Greene (Ray Stevenson). Greene, born in Cleveland but deeply proud of his Irish ancestry, was notable for several things. He rose through the ranks of organized crime in the ‘60s and ‘70s without blood family connections, his refusal to play ball with the local representatives of the New York Mafia had epically violent repercussions and he proved astonishingly difficult to kill.

There’s a fair amount of myth-making here. As director Jonathan Hensleigh and his fellow screenwriter Jeremy Walters tell it, Danny has a conscience and a code of ethics (it is a matter of real-life record that he paid school tuitions for poor youths and distributed holiday food to those without, but this doesn’t necessarily equal a soul-searching persona), so that while he is a vigorous loan shark collector on his way up and thinks over whether or not he should perform certain hits, the only people he actually kills are those who have tried to kill him. Since there are plenty of guys who fit this description, KILL THE IRISHMAN doesn’t lack for action and since bombs are often the weapon of choice, that action tends to be loud and fiery. Director Hensleigh gets particularly creative when a house comes down on its occupants in a standout sequence.

Danny is happy enough to have confidantes of all stripes – he works for a time for the Jewish Shondor Birns (Christopher Walken) and becomes friends and business partners with Italian-American John Nardi (Vincent D’Onofrio) – yet indulges in foul ethnic slurs against the Italian Mafia. The underlying message is that Danny isn’t really a bigot, he just doesn’t like being pushed around, but when the film tries to make something big of Danny’s heritage, with Fionnula Flanagan delivering what amounts to a benediction, it doesn’t really jibe with what we’re seeing.

However, both the movie and actor Stevenson succeed in convincing us that there is something special about Danny that strikes people immediately. Stevenson has a steady, intense presence that makes the character magnetic, whether he’s quietly flirting with a waitress (Linda Cardellini, very good) who will become his wife or standing firm in the face of dire threats. D’Onofrio gives an intriguing performance, starting out intimidating and becoming softer and softer as partner Danny gets more and more powerful and Walken gives his customary eccentric zip to a character who warrants it.

KILL THE IRISHMAN tries a little too hard for an emotional impact it can’t achieve, but it still tells an engrossing story about an interesting man living in interesting times.