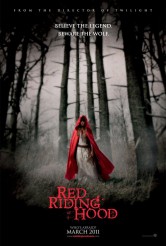 The Big Bad Wolf in RED RIDING HOOD is not the real villain of the piece, but the script itself by David Johnson – a messy, TWILIGHT-infused Tween disaster directed by TWILIGHT’s Catherine Hardwicke.

So desperate to match TWILIGHT’s main beats (innocent girl enticed by a Big Bad), RED RIDING HOOD blows every opportunity to be its own movie.

Hell, Shiloh Fernandez who plays Huntsman Peter opposite red riding hood Valerie (Amanda Seyfried) is a dead ringer for the pouty Robert Pattinson from the TWILIGHT series. It looks like he even has the same hair-stylist.

RED RIDING HOOD is a revisionist take on the Brothers Grimm classic. Here, a small village, hidden away in the remote woods in a nondescript time and place, is terrorized by a nasty werewolf whose taste for blood has extended beyond livestock and into the human variety.

Valerie has always been a bit of a reckless girl. She has good looks, but as a child you liked to slit bunny throats. She also likes Peter, and not the handsome and wealthy Henry (Max Irons) who she is arranged to marry. One of the film’s more perplexing aspects is, what being wealthy implies in this village. After all, if you’re living in the village, you clearly are living well below your means. Does this mean he has an extra bed in his house or that he can afford silver utensils instead of wooden ones?

After an attempt to slay the wolf fails miserably, religious werewolf hunter Solomon (Gary Oldman) shows up and is more violent and brutal than the werewolf itself.

There are tons of red herrings (no pun intended) sprinkled throughout the film, so you’re kept guessing who might be the werewolf. There’s even Julie Christie as Grandmother (and yes, that famous exchange from the book shows up here and its delivery totally sucks).

What’s missing though is a story that resonates and makes sense. It’s an empty exercise that’s not quite a horror movie and not quite a romance. Seyfried, who is usually so good, is reduced to playing the beautiful doe-eyed maiden but without any real soul or heart. Her character is an aberration. Oldman hams it up with his heavy-handed role, as does Christie.

That said, the film is gorgeous to look at. The production design work by Thomas E. Sanders is quite exceptional and the costumes by Cindy Evans bring s fresh style to a well-worn tale. Even the score by Brian Reitzell is quite memorable (when it’s not over-rided by the inclusion of totally annoying and out-of-place Goth rock songs.

Still, this doesn’t make up for a script that feels like it was made by committee – too many random moments and too much of insistence to be like TWILIGHT, which ruins any attempt at it being its own animal.

Even the CGI werewolf is TWILIGHT-inspired (slightly over-sized) and uber-atrocious. Plus, how can you have a werewolf movie and NOT at least attempt one transformation?

RED RIDING HOOD brings to mind Neil Jordan’s superb 1984 cult classic THE COMPANY OF WOLVES which took the Red Riding Hood tale into a similar direction but did it with far more finesse and style than is on display here.

I was rooting for a winner here. Catherine Hardwicke is sometimes a good director, except she’s jumped so firmly onto the Tween bandwagon, she’s lost track of what it takes to tell a good story first and instead it focused on how to cater to the target demographic. A shame indeed.