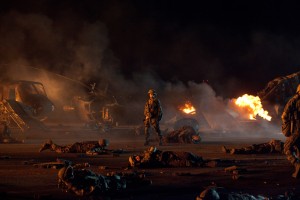 Director Jonathan Liebesman may have got his start working on the horror films DARKNESS FALLS and THE TEXAS CHAINSAW MASSACRE: THE BEGINNING, but he’s now moved up to the big budget action leagues with BATTLE: LA.

The ambitious and impressive alien invasion flick follows a global alien attack, with Los Angeles being the last hope at victory as a ragtag platoon of marines try to figure out what these aliens are made of and what they want.

ASSIGNMENT X recently spoke with Liebesman in this exclusive interview as he talks about filming the movie and teases about what he hopes to do on his forthcoming WRATH OF THE TITANS (a sequel to last year’s CLASH OF THE TITANS reboot).

ASSIGNMENT X: What made you decide to go the documentary approach for BATTLE: LA?

JONATHAN LIEBESMAN: I had seen [DISTRICT 9’s] Neill Blomkamp’s short films, and watched films by guys who had put CGI into normal hand-held video footage and it was stunning. It was very weird and such a good idea. As I started sketching out ideas, I thought “this should be this style.” It wasn’t so much of a no brainer when I read the script, but then, “yeah, it should be SAVING PRIVATE RYAN and BLACK HAWK DOWN with aliens”. And stylistically Neill blazed the trail with that style with the hand-held vibe, and he ended up shooting DISTRICT 9 that way and it was perfect for this film.

AX: What was your philosophy on not showing too much of the creature?

LIEBESMAN: I feel the problem is, audiences imaginations are so much better. As soon as you show something, it will demystify it. You have to hope they will find the characters interesting enough to accept you’re not going to show them everything. So, yeah, that’s kind of the philosophy. Also, how much would you see of aliens if you were in combat with them? As you go into the streets, you barely see them, and then when you get to see them, you take advantage of that moment. The philosophy is “what would really happen?” The editor was pretty honest, and would say “that looks like s**t, you can’t show that.”

AX: Are you looking to continue this story?

LIEBESMAN: If I get to do another BATTLE movie, if it does well, and people wanted to see another one, it would be a far superior movie. It will be ROAD WARRIOR to MAD MAX.

AX: Would it be more Los Angeles battling?

LIEBESMAN: I would like to see something more evolved than taking back Los Angeles. Something bigger and more ambitious than that. 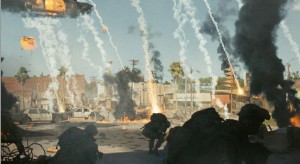 AX: I think people forget that being a horror director, helps with action films. Your experience with those earlier films is what I think makes BATTLE: LA so good.

LIEBESMAN: You definitely learn on every film and bring it to the next one. Everything I learned on this one will be valuable to WRATH [OF THE TITANS]. I think if you look at CHAINSAW. The script is whatever it is, but there’s definite suspense in there and I’ve learned how to put an audience on edge. You have to set something up that’s terrifying, so the whole first part of BATTLE is setting up what these creatures are capable of and how they just destroy everything on a macro-level. Now you’re in the street with them and they kick your ass. And when you cut to the scene in  Laundromat with the young marine, it’s setting up how scary these things are and it’s a total horror trick. The first scene in a horror movie is to show how bad this thing is. In SCREAM, it rips everyone apart, in JAWS it kills the girl, in THE RING, it’s the aftermath of the videotape.

AX: Do you feel it’s important to convince people that the 3D in WRATH will be better than the botched post-convert job done on CLASH?

LIEBESMAN: It’s like when you become a mayor of the state, the state exists, and things have happened before and you have to explain why you’re moving in a new direction. I think the proof is in the pudding. When we show the first footage, whenever that will be, it better be f**king good, I won’t have to apologize anymore.

AX: What have you taken from BATTLE: LA that you know you’re taking into WRATH.

LIEBESMAN: I definitely think a grounded, gritty feel – a realistic vibe. We’re using technical advisors for the action sequences and not just to be showy and flashy, but what [actor] Sam [Worthington] and I have been talking about is getting him totally battered in this movie. It’s going to feel real he’s really taking hit hits. Stuff like Mel Gibson in BRAVEHEART did so well where he gets f**ked up – just him getting hurt and him being sort of rusty are elements that Aaron [Eckhart] did well in BATTLE: LOS ANGELES. You really feel this guy is determined, but he’s not a young buck.

AX: Do you want to get Aaron in WRATH?

LIEBESMAN: I would have loved to, but most of the parts were cast and the studios already had ideas of who they wanted. Man, I want to work with him again, I don’t care what. I just had a good time with him.

AX: It’s so hard to establish yourself, especially starting in the genre. You’ve done an incredible job, but you’ve said before that you had to shoot some of the movie before you went into your pitch meeting to secure your BATTLE: LA job.

LIEBESMAN: It never ends. That’s why I took WRATH. They offered it to me, I know I can do something good with this and I don’t want to do another audition. I don’t write my own material. What blew me away when I entered the industry, when they have a great script, they give it to the big directors and those guys are duking it out, even with their track records. You have Ridley Scott and dudes like that – they still fight for stuff. They still have to pitch to a studio. It’s unbelievable to me. It scares me, because it never ends. We’re talking about the best dudes, unless you write your own stuff. I guess Ill have to somehow fall asleep one night and wake up with writing talent.