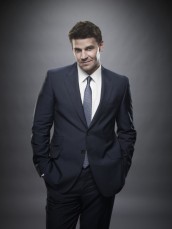 The actor talks plot, tone and a new movie 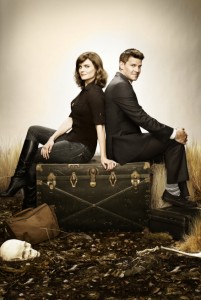 Poor Seeley Booth. Sure, the BONES FBI special agent and former military sharpshooter played by David Boreanaz is at the top of his game as a lawman, but when it comes to love, he faces one setback after another. At the end of Season Five, he wanted to make a go of it with Dr. Temperance “Bones” Brennan, played by Emily Deschanel, but the thought of that kind of intimacy with her good friend and partner frightened her.

Between seasons, Booth fell for globe-trotting ace journalist Hannah Burley (Katheryn Winnick), and this season, the two moved in together, but the romance fell apart when Booth proposed marriage and Hannah declined. Now Booth is defiantly single again, embracing his professional partnership with Brennan (who has acknowledged she may want something more, but Booth is now gun-shy) and tracking a sniper (THE MUMMY’s Arnold Vosloo) with ties to Booth’s past.

Boreanaz, who is also a producer and director on the hit Fox series, sat down to talk about the current season of BONES.

ASSIGNMENT X: Is Season Six going as you hoped it would?

DAVID BOREANAZ: Yeah, I think it’s going better than I thought it would. I went into the season pretty much hoping for the best on all levels, and it’s pleasantly surprised me. I think the writing’s been very strong, I think the relationship has been very interesting and the fact that it’s not very heavy B and B [Brennan and Booth] right now, they were kind of separated with the triangle with the relationship with [Hannah], I think it’s good, because we can always go back to good old-fashioned B and B cases, which is what the show is about. but we’ve done some great shows and I’ve enjoyed directing so far, I’ve had one [episode, “The Bullet in the Brain,” which aired January 27] out after the premiere of the second half, I’m doing another one, so I’ve really enjoyed that aspect of it. It’s busy, it’s a lot of work, but I like the way the characters are unfolding. I’m happy with it. 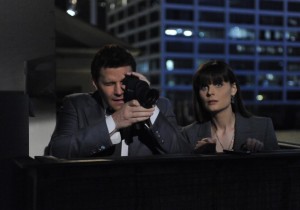 AX: There have been a few episodes with a somewhat different tone than usual, with Brennan upset that she’s missed her shot with Booth and Booth upset that he can’t make a permanent connection with a woman. It’s a little bit more serious and sober, I guess. Are you going back to a lighter tone now?

BOREANAZ: Oh, yeah. We’ve got the sniper arc, that’ll be a serious couple of episodes, but we’ll always have those tongue-in-cheek moments. We’ll get back to those episodes where it’s just the two of us [Booth and Brennan] solving crimes. I think once we’re over this other relationship arc and the sniper arc, I think next season will be an “up” arc.

AX: Are you looking forward to working with a real infant when Angela has her baby?

BOREANAZ: I don’t know how much I’m going to be working with her as far as the baby is concerned. I’m not the daddy [laughs].

AX: Are you enjoying the relationship with the little boy, Ty Panitz, who plays Booth’s son Parker, as he’s growing older? 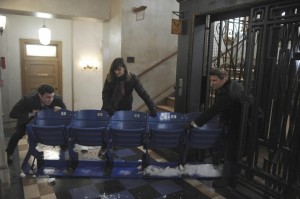 BOREANAZ: Yeah, it’s been interesting. We’ll see how the sniper can affect my relationship with my son. There will be some heavy moments, but we’re getting back to more light-hearted stuff.

AX: Did you do anything else during the hiatus between Seasons Five and Six?

BOREANAZ: I just traveled and relaxed. I’ve got a new film coming out April first called THE MIGHTY MACS [a high-school basketball drama]. It’s been picked up through Columbia distribution. Tim Chambers directed that, that’s coming out, I’m excited about that.

AX: Were you concerned at all about BONES moving from its timeslot at 8 PM to 9 PM, or do you feel you’ve got a good lead-in there?

BOREANAZ: There’s not really much for me to be concerned about. We’re a show that’s really grounded itself and established itself in what it is. Is it great to be going up after AMERICAN IDOL? Sure, we get more publicity. Why not? It means they’re going to have to do publicity for the show. That’s the best thing for us. You can’t say anything bad about that. I don’t feel any pressure – I don’t really think about those kinds of things. I know our audience is there, will always be there, and if we can get more eyes to it, I would love to see that and I would love to see the show grow even more. 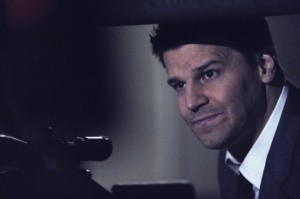 AX: And you’re still enjoying playing Seeley Booth and finding out new things about him?

BOREANAZ: Yeah, every day. He’s such a great character. I mean, I’m in a great job. I get to work with a character who’s got so much going on in his life. He’s got a great relationship. It’s a great on-screen chemistry, I think one of the best in television, and it will go down as one of the best in television, and we’re very proud of that. So it’s the type of show that has fun, solves crimes and there’s a relationship. I don’t see what more you can really want.

AX: Do you have plans for what seventh season of BONES might be?

BOREANAZ: I don’t know. I don’t look that far ahead. I just work on what we’re doing now. I always have. That’s my motto [laughs].