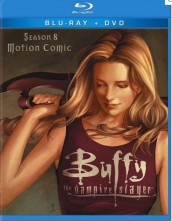 It’s great to have Joss Whedon’s beloved creation back in a moving medium, but with different voices of all our favorite characters, it’s just not the same

Ever since BUFFY THE VAMPIRE SLAYER went off the air, there’s been a hole in fans hearts hoping for a resurrection (and the movie reboot without creator Joss Whedon is not it).

However, the BUFFY THE VAMPIRE SLAYER comic book that has been “executive produced” and periodically written by Whedon himself over the last four years as SEASON 8 and it’s been an absolute joy. It’s brought back the universe we all loved with the correct voice and tone. There’s been death and surprises along the way and it truly is the next best thing to having a Season 8 back on television.

With motion comics becoming all the rage, it was only a matter of time before BUFFY – Season 8 was transformed into the BUFFY – SEASON 8 MOTION COMIC.

So what is a motion comic? It essentially takes the comic book panels, puts some movement, texture, and other clever edits to make it feel like you’re watching some kind of hybrid animation TV show. There’s also music and people voicing the characters.

It’s pretty cool when done right, and for the most part, the Blu-ray/DVD release has brought the first 19 issues of Season 8 to life in a proper way.

The bad news, the voices are all wrong. This isn’t that big of a surprise, after all, it’s a given most of the original BUFFY voice cast wouldn’t come back for the peanuts they were probably willing to pay, but you’d think they would have at least tried. And if they did, tried a little harder.

Sure, some of the actors evoke the spirit of Buffy, Xander and Willow, but the words Whedon has penned just don’t seem fluid when they’re not spoken by the actors that defined those roles – Sarah Michelle Gellar, Nicholas Brendon, Alyson Hannigan, Anthony Stewart Head and many others.

In fact, not having them on board is pretty distracting.

The story of the first 19-episodes picks up with Sunnydale turned to dust and every potential slayer in the world now fully awake and in need of some training and guidance. Hiding out in a castle in Scotland, the entire Scooby gang is re-assembled to train and prepare themselves for more world destruction action to come.

It ain’t easy though, as the government wants to stop Buffy and she has a new Big Bad named Twilight watching over her.

For fans who have read the comic books, it’s enjoyable to revisit the first 19 episodes, by, well, rewatching them. Some of the subtitles and the nuances come to the fore and it’s a reminder of what a great storyteller Whedon is as are his fellow writers, some BUFFY TV series alum.

But the voices. Why, oh, why couldn’t they have dropped some dough to bring SOMEONE back for continuity sake?

Since the first 19 episodes only represent half of the Season Eight comics, if this proves to be a successful release, count on the second half to be transformed in a similar way.

Still, if it’s slam dunk,  maybe Fox will realize there’s more cache value in getting a few familiar voices to make a reprise to their roles for the die-hard fans.

This release features both DVD and Blu-ray bundled together with handful of bonus features including a trivia experiences, a test of the first issue, a covers gallery and a reprint of the first comic. The DVD allows you to drop the disc into your computer and create your own BUFFY comic book to boot.

Don’t get me wrong, as a die-hard BUFFY fan, this is a prized possession. I do enjoy the storytelling and the motion comic concept. The lesser grade just represents the awkwardness in getting through each ten-minute issue or so while getting used to new people voice our old favorites.

AGREE? DISAGREE? LET YOUR VOICE BE HEARD – COMMENT BELOW …