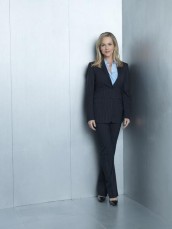 The actress talks her superpowered new role, plus BUFFY, ANGEL and DEXTER

The title of ABC’s NO ORDINARY FAMILY is accurate. After a plane crash and an encounter with strange glowing water in a remote part of the South American jungle, the Powell family is changed. Dad Jim (Michael Chiklis) now has super-strength, daughter Daphne (Kay Panabaker) can read people’s minds and son J.J. (Jimmy Powell) can make instant correct deductions. As for scientist mom Stephanie, played by Julie Benz, multi-tasking between home life and lab work has become so much more easier since she’s acquired super-speed.

This isn’t Benz’s first brush with superpowers. After she appeared in a recurring role as a law enforcement officer on ROSWELL, where she was investigating aliens, Benz was cast as Darla the vampire on BUFFY THE VAMPIRE SLAYER, where she recurred often and was resurrected on the spin-off ANGEL, with all the abilities bloodsuckers had on those shows. More recently, Benz spent four seasons on DEXTER as the kind-hearted Rita, a mother of two who never realized that her perfect man was a also serial killer. When Rita was murdered by a killer Dexter was tracking on that series, it made for a truly shocking season finale. Benz moved on to a stint on DESPERATE HOUSEWIVES before returning to series regular status as FAMILY’s swift Stephanie. 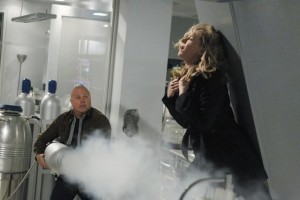 ASSIGNMENT X: Does playing a character with super-speed feel like any kind of homecoming for you, seeing that one of your big roles early on was the super-powered vampire Darla on BUFFY and ANGEL?

JULIE BENZ: But I don’t have every power [as Stephanie].

AX: Do you miss any of the other powers, or are you happy to have super-speed plus a family, without having to bite people?

AX: When you found out that Rita was going to die on DEXTER, did you realize what an enormous impact that would have on the audience?

BENZ: I had a hard time seeing past my own drama of finding out my job was ending. And it wasn’t just the job was ending – it was leaving a family I had for four years. We were all very close, the main cast, and so I was more struggling with leaving that family than understanding the impact, so it was lovely to see the impact that – the monumental moment that was created in the show’s history and lore, but it’s not something that I noticed right away [laughs]. I didn’t actually know – I knew about an hour before the script was put out that Rita was going to be killed off, but they didn’t tell me how until an hour before I went to shoot that scene. So I didn’t really know how it was going to be. I mean, I thought I was going to be pushed off the building [like the killer’s previous married victims], but I ended up in the bathtub.

AX: When your role as Rita ended on DEXTER, you went almost immediately onto DESPERATE HOUSEWIVES. Had ABC said to you at any point, “You know, if you don’t wind up a series regular on HOUSEWIVES, we’re interested in you”?

BENZ: You know, I auditioned for NO ORDINARY FAMILY. It was pilot season and I was working on DESPERATE HOUSEWIVES just happy to be there. It was a great-feeling place for me to go to after being killed off on DEXTER and to play the exact opposite of Rita. Robin [on HOUSEWIVES] was just very healing for me, for my soul, my spirit. And to work with those amazing women whose work has inspired me was just a thrill. But I was auditioning for new pilots, and I auditioned for this one. It wasn’t like they just gave it to me. But DESPERATE HOUSEWIVES is how ABC became familiar with my work.

AX: Robin was a professional stripper. Did you do any kind of special off-camera workout to get in shape to play her?

BENZ: No, I’m a workout junkie. I’ve been an athlete all my life. I was a figure skater growing up. Some people go to therapy; I work out. It’s my stress reliever. When I have to do scenes that require less clothing, I really just watch my eating, I watch my sodium intake and I just eat very clean. I can’t live that strict [indefinitely] in real life. I’m a big foodie. I love food and I love to eat.

AX: Did playing a mother on DEXTER for four years prepare you for your on-camera motherhood in NO ORDINARY FAMILY?

BENZ: Yes and no. The kids that I worked with on DEXTER and on NO ORDINARY FAMILY, they’re extraordinary children. I mean, Kay Panabaker [who plays the daughter on FAMILY] graduated high school at the age of thirteen, she went to college at seventeen. She’s an extraordinary human being. And all the kids I’ve worked with – they’re different in that they’re just more astute, there’s something special about them. I struggle with not knowing whether I should reprimand them or whether I should take them out drinking [laughs].

AX: Your character Dr. Stephanie Powell is a scientist. Did you do any research into being a scientist when you got this part?

BENZ: No. My research lies in really talking to the writers about the world that they’re creating. It’s the same way I researched Darla on BUFFY and ANGEL. That world truly existed in Joss Whedon’s mind. I could read ninety-seven Anne Rice books and never really grasp the world that Joss Whedon was creating, so why waste my time when all I really needed to do was talk to Joss Whedon about the world that he was creating? It’s the same with the writers on NO ORDINARY FAMILY, picking their brains about what it is they want to create, what the tone is, how they see the character, how they would like me to physicalize the character, so that’s how I work as an actor. I’m not big on doing gratuitous research, because I think some of it can be a waste of time. 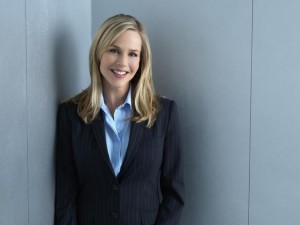 AX: Anything else we should know about NO ORDINARY FAMILY?

CLICK HERE for exclusive interviews and reviews of DEXTER