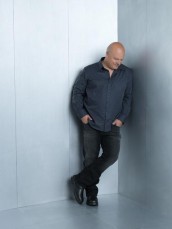 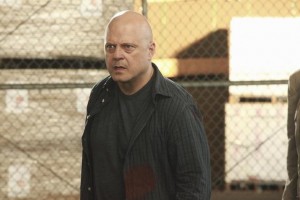 In ABC’s NO ORDINARY FAMILY, the Powells come back from vacation much less ordinary than when they left. Mother Stephanie (Julie Benz) has super-speed, young son J.J. (Jimmy Bennett) has super-intelligence and teenager Daphne (Kay Panabaker) can read minds. As for family father Jim, played by Michael Chiklis, he is suddenly strong enough to toss a car, muscular enough to leap on top of a building and hardy enough to stop bullets.

Chiklis has been involved in the superhero genre before, playing Ben Grimm/Thing in the two big screen adaptations of  FANTASTIC FOUR. On television, he spent five years as the young, good- guy police commissioner on THE COMMISH; more recently, he spent seven years as ferocious anti-hero corrupt cop Vic Mackey on FX’s THE SHIELD.

ASSIGNMENT X: Were you actively looking to do a series a little lighter than THE SHIELD? Granted, practically anything would be lighter than your character Vic Mackey in that series …

MICHAEL CHIKLIS: Well, look. I’m sure that if I saw a character that was as deep and complex as Vic Mackey in a dark world, I would have been attracted to it, but that’s a rare, rare bird.

AX: That was a very unique show.

CHIKLIS: Very unique and rare. I’m not trying to run away [from Mackey]. There are shades of that heroic aspect of Vic Mackey in this character. I mean, there aren’t those shades of gray that you see in Mackey. I just loved this script. Looking at what was out there, to me, NO ORDINARY FAMILY is far and away the most unique and exciting new show that I’ve seen come down the pike for awhile. I’d make a music analogy. Everything comes from some influence. If you look at any great musician, they have influences throughout their lives growing up. They listen to all these [other] musicians, and they take and borrow from all of them, and that amalgam of different influences manifests itself in them being an individual artist. That’s the way I feel about this show. It borrows from a lot of things that we’ve loved, and because it’s an amalgam of those things, it ends up being something completely unique and different. We’re doing something that is quite ambitious here.

AX: Your character works with the police …

CHIKLIS: He’s a sketch artist for the police department.

AX: You seem to play a lot of people involved with police departments – the title role in THE COMMISH, Mackey in THE SHIELD and now this. Are these police roles something you feel an affinity for, or is this just how you get cast?

CHIKLIS: Well, this was not a policeman. I think the reason why there’s a lot of police in series television is that’s where a lot of the excitement in the modern world is, crime and punishment. [This] is a character who is in a transitional period in his life [when we first see him]. He’s a failed artist – he really wanted to be a great artist and now he’s using his art in a constructive manner, being a sketch artist for the police department. So he’s gainfully employed. He’s contributing to his family. He’s not quite a Mr. Mom, but he’s a very active father. And now his kids are growing up, and his wife is very successful, and he’s sort of going, “Where am I in this?” I don’t think that qualifies him as a sap so much as a strong man who is trying to determine what the rest of his life is going to look like.

AX: How does he deal with the superpowers manifested by the rest of his family? 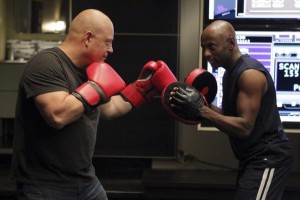 CHIKLIS: Well, you can imagine – I have a sixteen-year-old [in real life]. I cannot imagine what life would be like if my sixteen-year-old could read my thoughts [laughs]. It would be terrifying. The superhero element in the context of a family drama – it just opens up so many worlds that we can enter and makes it exciting and potentially extremely entertaining television. I think the notion of having different superpowers really connects with people in general, because the modern world is very frustrated, and you can’t help think, oh, if only I could this, if only I could that. It’s wish fulfillment.

AX: This is your second character with super-strength, the first of course being Ben Grimm/the Thing in the FANTASTIC FOUR films. Is there something about super-strength as a specific power that appeals to you?

CHIKLIS: I think there’s something incredibly alluring to me about being powerful, because sometimes I feel helpless to do things.

AX: Do you like the way they handle his super-strength? I mean, do they ever put you on a rig or do they do CGI and then just position you where he ends up?

CHIKLIS: Oh, no. It’s a mixture of practical effects, like a wire, and physical stunts and CGI. It’s a good mix.

AX: Do you have to do a particular workout to be able to handle being put in a rig?

CHIKLIS: I just work out very hard on a daily basis. I try to stay fit and flexible. I think it’s very important for everybody on this show, particularly Julie and I, to stay fit and be able to handle it, because we’re being asked to do all kinds of crazy things.

AX: Is there anything else you’d like to say about NO ORDINARY FAMILY?

CHIKLIS: Let us entertain you.