THE GOOD WIFE’s Julianna Marguiles takes time off the set to promote her hit drama’s second season. Playing a lawyer, says Marguiles, 44, isn’t unlike that of portraying a doctor on ER. Things happen very quickly, sometimes in a ridiculously short period of time, all for the sake of good drama.

On how, unlike in real life, things happen very quickly on TV…
“Well, it has to because it’s only a 42-minute show,” says Marguiles. ” I mean, my husband is a lawyer, and the first time he saw (the show) — he wasn’t a big television watcher.  And of course, he has to watch it now.  And when he saw the first episode, he’s like, ‘Well, that would have taken months, that case.’  And I said, ‘You’re absolutely right.  And then again, we have 42 minutes.’  And that’s our artistic license as storytellers on television.  Sadly, we don’t have the luxury of time.  So — and I do think, for the most part, especially once you get used to that, you allow for that.  As a lawyer, I’m talking — now it doesn’t bother him anymore.  Otherwise, how would we be able to tell the story?”

On how she feels about the gay/lesbian aspect of the show…
“Oh.  Well, you know, it’s interesting,” she says. “I don’t think about it.  I don’t feel like it’s a presence.  I feel like it’s part of life. I think that’s why it works. It’s not screaming anything but, ‘This is my brother, who is conflicted in life and having relationship problems.’ And that’s what I love about it.  I think if [there were] gay and lesbian [characters on the show] just to be gay and lesbian to make people happy that we have those characters on the show, that would make me uncomfortable because it wouldn’t be truthful.  But I feel like the way it’s been incorporated into the fabric of this show, it really fits in with modern times and what we’re all dealing with, just as much as my character is dealing with the fact that her husband slept with hookers is the same way my brother’s character is feeling like he screwed up his relationship because he cheated.  And that’s what I love about it.” 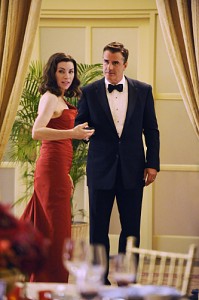 On her show attracting an older demographic…
“Honestly, I’m just so happy to be working on a good show, it’s never really crossed my mind,” says Marguiles. “The truth is I don’t really see it that way, to be honest, because I live in New York City.  The people who watch the show, who approach me on the streets, aren’t that old, to be honest.  And I’ve had a lot of kids 13, 14, 15 who watch the show with their parents, who are loving the connection and the way Alicia parents her children.  So I know it’s all demographic and numbers, but from my perspective, it seems to be reaching a much wider audience this year.  This season, we’ve done quite well in the younger demographic.  And I think it is — to me, as long as the content is something I’m proud of and the work is satisfying, whoever wants to watch it, God bless.  And whoever doesn’t, that’s their prerogative.  It doesn’t affect me, but I’m not paying the bills that CBS is, so I don’t know.”

On the THE GOOD WIFE’s growing numbers of audiences…
“I think I’ve been doing this long enough never to assume anything, and then you’ll be pleasantly surprised,” says Marguiles. “So I knew when I saw the pilot.  I really knew it was something special.  But I truly didn’t have an inkling of whether people would gravitate to it.  You just never know.  And so it has been beyond a surprise, because it’s work I love doing.  And it’s such a collaborative effort. The teams are unbelievable. I mean, down to props and hair and makeup and wardrobe.  I mean, it is the most creative atmosphere I’ve ever been on and a place where everyone wants to be.  We keep picking up viewers every week. I mean, it’s a pleasant, lovely surprise.”

On whether her friends bug her about what’s going to happen next on the show…
“Honestly, it’s been really fun because there’s not one person in my life that wants to know what’s going to happen,” says Marguiles. “They’re so tuned into the show, like, ‘Don’t tell me.  I don’t want to know.  Okay.  Tell me.  No, no, no, but don’t tell me.’  It’s hilarious.  Even people I’ll meet just on the street, they’ll say, ‘I love the show.  What’s going to happen with — I don’t want to know.’  And it’s kind of the way I feel too.  Like, I want to be in the moment and enjoy it while I’m doing it.”