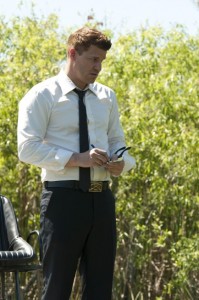 In the second part of our two-part interview with BONES executive producer/creator Hart Hanson, who developed the series based on the mystery novels written by real-life forensic anthropologist Kathy Reichs, he talks about actors who direct, why he’s unlikely to use misleading semantics again and whether he has plans for a final episode. Fellow BONES executive producer Barry Josephson provides a story about Reichs’ visit to the set during the filming of the pilot episode.

ASSIGNMENT X: David Boreanaz is directing more episodes. How does that work? Does he come in and say, “I’d like to direct one,” and you go, “Okay, we’d better give Booth laryngitis for this episode, so he won’t have to be in as many scenes”?

HART HANSON: Right at the very beginning of the series, David said, “I would like to direct.” He wanted it in his contract that he would get a chance to direct. I said, “That’s not necessary. You will direct when …” Originally, the idea was going to be I think [that he’d direct] in the second season, but you get busy. It’s a tough job, being a lead in a series. So when he felt again that he wanted to do it, we did it.

We’re talking to Emily Deschanel about directing. She deserves a chance, too. [Boreanaz] did an awesome job on his [first BONES episode as director, “The Bones That Foam” in 2009] – he gets mad at me, how surprised I was at how good he was. I thought he’d be great from the seat of his pants directing, and I thought he would not prep well, because he’s the Tasmanian Devil, you know, he can’t sit still. It’s shocking how he can do prep. All of a sudden, he turns into the good student, he does his homework. It’s like he puts on a director’s hat and his personality changes. He gets annoyed, but I am still shocked. He’s a good director at both sides of it. We thought it would be fun for him to do the hundredth [episode]. He was in the lineup around there anyway, and we thought, “Well, this is good, and people will pay attention.” It’s a nice tip of the hat to a hundred episodes.

AX: Do you have to structure an episode that an actor will direct so that he or she is not too heavily featured in it as an actor?

AX: Do you prefer episodes that are more standalone or more arced/serialized?

HANSON: There are a lot of reasons to go less serial. For us, making the show, we’d love to make the show more serial. We want to start telling larger stories . That’s not what the studio or the network want, and they have good reasons. The thing was designed as an episodic show, but yes, we’ve done the Gormagon thing, and done the “want to have a baby” thing. It was time to be a little more episodic, so we’ve done that, but we all want to be more serialized.

AX: Because BONES has a lot of technical logistics, between the locations and the fabricated bodies, do you have any “I can hardly believe this” logistical horror stories that you can share?

HANSON: Every episode. The show looks like it costs about a million dollars more an episode than it does. Our schedule is almost in concrete – we have very little resilience, very little flexibility. I don’t have any anecdotes, because they’ve gotten good at this, but it’s a nightmare. Our line producer, Steve Beers, when he started this show, I’m not exaggerating, he weighed three hundred and fifty pounds. Now he’s about a hundred and sixty. And that’s just stress.

BARRY JOSEPHSON: Actually, when we were making the pilot, it was a very funny story. We were putting the first body together, and I remember, Hart and I had Kathy Reichs visiting the set for four days, and we brought Kathy over to the body, thinking, “Oh, my God, she’s going to think it’s completely fake and false and terrible,” and she looked at it and she said, “Hmm, maybe a little less intestinal tract. The rest is perfect – wow, that looks really good.” And I was so thrilled, because I had brought the guys who had done TALES FROM THE CRYPT to do our show, and I thought, “I hope we get this right,” and there she is, a forensic pathologist, telling us, “It’s good!”  [The practical effects crew] were very happy. Kevin Yagher and his brother [Jeff], they do a great job, they’ve been working with us from Day One and I couldn’t wait to just grab [them and tell them what Reichs had said]. 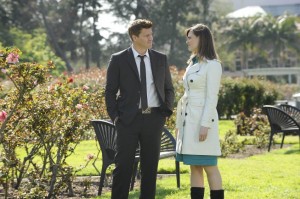 AX: Do you personally want Brennan and Booth to get together?

HANSON: I’m not avoiding the question, I’m just being honest – my job is to keep people wanting them to be together for as long as possible before putting them together without losing the audience. And that’s where all my brain goes. I don’t even think, “Eventually will they or eventually won’t they?” I know the end of the series that I have in my head, and I know where the relationship goes that I have in my head, but it’s an organic thing. The series makes its own demands between actors, audience, network, studio – I’m at the tiller, but there are currents and winds – oh, it’s such a lame metaphor.

It’s funny – I hear a lot in the Twitter world when I’m online about what the audience wants. And my response is, there’s no single audience. I talk to people all the time and they say, “Don’t ever put them together,” and others say, “If you don’t put them together next episode, I’m not watching.” It feels to me about sixty/forty that people want them together, but it’s a loud forty saying, “Well, I’m not going to watch if you actually …” It’s a game. It’s trying to figure it out all the time.

AX: Speaking of what fans want, you got into a little bit of trouble by saying that the fourth season finale would have Brennan and Booth making love, and that it wouldn’t be a dream. It turned out to be a brain-tumor-induced hallucination.

HANSON: We wouldn’t do that again. Not in that way [laughs]. It’s a funny thing – I was talking to the network about the hundredth episode [which took place in fifth season], and they said, “Well, we don’t want what happened with the [fourth] season finale to happen again.” And I know I can be obtuse, but I don’t mean to be difficult, but I said, “Why? More people tuned in than we ever had, and more people tuned in for a season opener than we’ve ever had. What exactly was the downside?” And it was literally that the executive I was talking to didn’t like that in the same way that the audience didn’t. Sometimes it’s hard to separate from how you’re making people feel – you’re making people feel bad.

AX: It seemed that you got a lot of flack for not so much whether or not Booth and Bones really had sex or really did not have sex, but because of the fact that you had said they really would, and then they really didn’t.

AX: Do you think in future you might refrain from the same sort of semantics?

HANSON: I am going to be more careful. People are really mad at me.

HANSON: I know David Shore very well, he’s a friend of mine. We did not talk about it. We’re at the same network – they never mentioned it to us. I know it looks like the network [said], “Hey, let’s have brain tumor finales.” By the time I found out – because really, if I’d known HOUSE was doing that, in good conscience, I couldn’t have done the same thing. I don’t know if David feels the same way – he tends to [be] less swayed by exterior things than I am – [laughs] David’s tougher.

AX: As we’re doing this interview, we in the press don’t know and you don’t apparently know whether or not BONES will have a seventh season. Do you have a plan for a show-ender for Season Six if you don’t go into Season Seven?

HANSON: I’m very negative, I’m very pessimistic. I’m not blasé, so I’m always worried that this is our last season. So the answer is yes. I know what the end game is and if we can see it coming soon enough, we’ll implement it. So I have an “Oh, my God, this is going to be our last season” ending and I have a “No, it’s not, we’re going to go at least one more season.”

AX: Do you have faith that Fox will tell you in enough time for you to know which plan you’re implementing?

HANSON: You know what? Fox has been very honest with me for a long time now. So I have some faith that if they can, they will tell me. But I understand that they might not be able to reveal that, and I hope that we would have a sense, like, “Oh, my God, we’re in big trouble,” or … There’s lots of scuttlebutt from agencies and [other sources]. I hope we’re doing well enough that we have some warning.

AX: Are you developing any other projects?

HANSON: I was just saying, I’m required to develop a pilot each year. I have five or six properties, and I probably will write another pilot this year, but I don’t know.