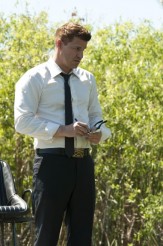 While speaking to the press today, BONES showrunner Hart Hanson talked as bit about the Season 6 finale and teases about what to expect as well as the status of a Season 7 renewal.

“The last two episodes of this season are going to run the whole gamut of tones that BONES does from A to Z – a lot happens in those last two episodes,” says Hanson. “I think the title of the season finale ‘A Change in the Game’ is about as much as I want to say about in any detail. It’s going to be one of those shows that the BONES audience will talk about and enjoy hugely. If anyone feels there’s an anti-climax to it, I’ve failed at my job.”

“It’s license fee negotiations,” says Hanson. “They are talking like crazy over there. In 2009, it wasn’t settled until the weekend before upfronts. I imagine this could be anywhere between now and May 15. I’m very confident we will come to a deal. There are all sorts of hoops and hurdles to jump through and over. Everyone is trying to figure out what it will look like. Will we make 16, 18 or 22? I guess those are all the models they’re going through. We’re kind of used to that over here. HOUSE is in a very similar place.”

That said, Emily Deschanel’s real-life pregnancy will also have to be worked into the show if Season 7 happens, and Hanson is ready to figure that out as well.

“We’re still contending with the effects of Emily’s pregnancy on the show,” says Hanson. “We have had multiple production conversations with the studio. The network will weigh in heavily. Were we to do four episodes without Emily, is the network interested in that? It’s conversations we haven’t had yet. I have to be ready for any of those contingencies.”