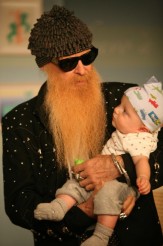 An episode about a dead storm chaser with some pretty spiffy tornado effects, plus the return of Billy F. Gibbons as Angela’s dad

“The Twist in the Twister” is a BONES episode that brings in some Weather Channel-esque action to spin an intriguing A story, with subplots for Brennan (Emily Deschanel) and Booth (David Boreanaz), Angela (Michaela Conlin) and Jack (T.J. Thyne), and even recently-released psych patient squintern Fisher (Joel David Moore).

The discovery of a skeleton in a closed children’s camp (apart from traumatizing a potential would-be camp counselor) leads to the revelation that the deceased was a “storm chaser,” someone who follows tornados to videotape them in their full fury. As with most human passions, it turns out that there is some pretty fierce competition in the storm chaser world, though the murder turns out to be a matter of sexual jealousy and mistaken identity.

When it’s determined that a lot of potential witnesses/suspects are gathered in North Carolina, waiting for another twister, Booth lies to Brennan so that she’ll stay home while he and Sweets (John Francis Daley) go to investigate. Brennan deduces that Booth is lying to her (she’s a brilliant investigator, after all) and shows up just as the tornado touches down. Brennan, Booth, Sweets, the storm chasers and the locals take cover in an underground shelter. Booth’s car gets hit by a fallen tree – and Brennan leaves him to find his own way home. Booth apologizes for lying, but says he plans to continue to be overprotective. He knows that he can’t really protect Brennan and their unborn daughter from all the dangers of the world, but acting as though he can makes him feel better.

Meanwhile, Angela’s rock ‘n’ roll star dad (Billy F. Gibbons) wants to babysit baby Michael. Angela and Jack are both exhausted from their crying eight-month-old and fear that Grandpa will just overstimulate the kid. Angela and Jack try lying, which of course doesn’t work, and it turns out that Michael likes blues rock enough to go to sleep. Family bonds are restored.

For a non-effects-based show like BONES, the tornado footage, including solid-looking objects flying through the air, is impressively staged. The details about how big storms function is pretty intriguing and explained in terms that lay people can understand.

It’s always a pleasure to see Gibbons on the show and it makes sense to have him on an episode about extreme weather, as both the performer and his character come off like fairly potent forces of nature. Angela and Jack (the characters, not the actors playing them) seem a little stereotypical in their knee-jerk concerns about how Angela’s dad may hyper-activate the baby – it seems like a stimulating day might be more likely to wear the little boy out so he’ll be sleepy when his parents come home – but it’s entertaining enough.

As for Booth being overprotective of Brennan, while their banter is appealing, he really is a bit more out of line than the script suggests. With Booth trying to pull Brennan to her feet while she resists, it doesn’t occur to him that he’s creating a physically hazardous situation for her where none initially existed. As for trying to dictate what a pregnant woman eats, most people in real life know that Booth is potentially taking his life into his hands. Finally, lying to Brennan in an attempt to keep her out of the field is insulting. Booth apologizes for this last, but the show suggests he’s being romantic rather than controlling and disrespectful, which is how it comes across, albeit Booth is sincere in his good intentions. It will be interesting to see how this dynamic plays out in future episodes.

“The Twist in the Twister” has some fun character interactions, plus a big onscreen storm and Billy F. Gibbons. All of this makes for good television.