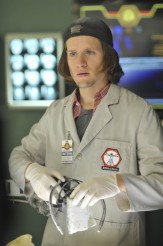 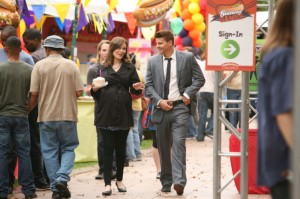 “The Hot Dog in the Competition” is a hot dog of a BONES episode, with some in-character Brennan (Emily Deschanel)/Booth (David Boreanaz) conflict, a new squintern who creates different moral dilemmas for Cam (Tamara Taylor) and Hodgins (T.J. Thyne) and a mystery with a setting we don’t see every day, namely the world of competitive eating.

When the body of a woman is found tossed through the glass of her pet python’s terrarium, the victim turns out to be Tina “the Python” Thomas, a competitive eating champion who had an edge because she could dislocate her jaw at will (like a constrictor snake). While examining the crime scene, Brennan casually mentions her baby is a girl – she knows this because she had an ultrasound. Booth is appalled that Brennan neither invited him along for the occasion nor even gave him the news first, though he’s happy to hear they’re having a baby girl. Brennan, aware that she’s hurt his feelings, resolves to try to see things from Booth’s point of view, which results in her doing things like driving with one hand on the wheel and tackling suspects.

Camhas hired eighteen-year-old whiz kid Finn Abernathy (Luke Kleintank) as a new lab assistant. Finn can spout autopsy jargon almost as well as Brennan, though Hodgins makes fun of Finn’s accent, calling him Opie. After Finn devises a way to save Hodgins’ newly-adopted snake, Hodgins apologizes and Finn starts calling Hodgins Thurston. However, district attorney Caroline Julian (Patricia Belcher) warns Cam that Finn spent three years in juvenile detention for attacking his stepfather, who disappeared – it is widely believed that Finn killed the older man. Brennan, however, believes in Finn. Finn finally tells Brennan that he did not kill his stepfather, and in fact it was reading Brennan’s work that convinced Finn not to go through with it – he knew he’d be caught. Brennan is naturally pleased as punch and Cam feels confident that Finn is a good addition to the team. Brennan apologizes to Booth for excluding him and shows him a DVD of their child’s ultrasound.

Being pregnant has happily not changed Brennan, and being a couple hasn’t changed the central dynamic between Brennan and Booth – he loves her but finds her very strange in many ways, while she loves him but is sure he’s irrational much of the time. Indeed, the baby just makes these stakes higher between them. Deschanel and Boreanaz are very much in tune with one another – it’s a pleasure to watch them riff together, whether the characters are arguing or getting along.

Finn is a likable character and Kleintank is likable in the role, even though he doesn’t look eighteen (according to IMDB, the actor is twenty-one). “Thurston” also seems like a somewhat older person’s jibe (surely there’s a more modern frame of reference for snobbery than GILLIGAN’S ISLAND). However, the saving the snake stuff is funny and Kleintank and Thyne play off each other enjoyably.

Finally, there’s the mystery of the week, which really gets its due as we learn obscure anatomical trivia like how a mis-ingested chicken bone can be mistaken for a budding physical ailment and a few tricks of the trade for those who want to venture into the competitive eating circuit.

This is the kind of BONES episode that makes us eager to consume more of the same.