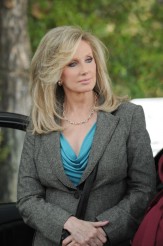 A decent mystery with some say-what character moments 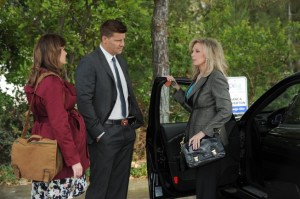 There seems to be a mini-epidemic right now on series television of stretching characters in directions they don’t naturally stretch. Other shows that shall go unnamed are doing it, and BONES is back to trying to expand the role of Dr. Lance Sweets (John Francis Daley) in non-organic ways by having him training to be certified to carry a gun. Brennan (Emily Deschanel) thinks this is a good idea; Booth (David Boreanaz) thinks this is a bad idea. Booth is right, but not for the reasons he cites (since he’s not privy to the meta fact that this is all part of a TV episode) – it’s not funny, it’s not dramatic, it doesn’t move any other aspect of the plot along and it feels forced.

The main plot concerns a toy developer who is found dead in a landfill holding a somewhat battered Prince Charmington doll. Lab assistant/Sweets’ girlfriend Daisy (Carla Gallo) is obsessed with the doll, while the team tries to puzzle out whether the victim was killed by a work rival or perhaps by her broke brother (Rick Gonzales, who was Benjy on REAPER). Tying in with the toy theme, and a source of most of the episode’s actual humor, are Angela’s (Michaela Conlin) increasingly frustrated efforts to assemble a toddler toy using badly translated instructions.

This last will strike a chord with almost everyone, since even childless people have dealt with this at some point. Conlin plays the normally gentle Angela’s rising rage wonderfully.

As to the main storyline, writer Dean Lapata and the production design team have some fun with the toys in development. Brennan does seem a bit denser than usual or necessary – surely even she has heard of teddy bears – but much of this is still amusing. Morgan Fairchild guest stars as the head of the toy company, looking great while playing smoothly professional.

The episode also ends on a cheerful note that seems totally unaware that it’s touching on controversy – as a present for the baby she’s carrying, Brennan buys two toy machine guns that shoot nerf balls. These can be handled safely by Brennan and Booth, as adults, but do they really want something that looks like a gun as a plaything in a house where Mommy and Daddy have real guns? Some people don’t see anything wrong gun toys for children, but wouldn’t someone in this scenario feel that a realistic-looking projectile weapon is not a great toy for a tot, if only because the child may not understand the difference between the toy and something that looks like the toy but shoot bullets? Evidently not, as the episode concludes with Booth and Brennan happily playing with the nerf ball guns. To quote another famous fictional detective, alrighty then.

The procedural aspect of “The Prince in the Plastic” is lively, with good clues, misdirections, course corrections and a nice sight gag involving someone dressed as a toy. It just spends a lot of time trying to generate some kind of emotional response on a plot thread that never achieves traction.