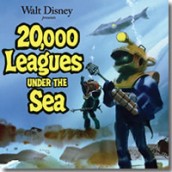 If Walt Disney had a house composer, few occupied more glorious rooms than Paul J. Smith, whose seminal Disney animation scoring credits included SNOW WHITE, a shared Oscar win for PINOCCHIO and co-nominations for THE THREE CABALLEROS and CINDERELLA. While these may have seemed like cartoons on the surface, the action, humor, and emotion that Smith invested in their scores made the pictures as richly palpable as any live-action movie. It was this talent that made Smith particularly invaluable when it came time for Walt’s “real” deals like THE SHAGGY DOG, THE PARENT TRAP and POLLYANA, not to mention any number of Disney nature documentaries. But in terms of its epic quality, no Disney film Smith scored would pack the grandeur for another movie adaptation of Jules Verne most famous story, especially as 20,000 LEAGUES marked its first sound incarnation.  Directed by Richard Fleischer (the son of Disney’s animation rival Max), and starring Kirk Douglas, Peter Lorre, James Mason, and the cinema’s most recognizable submarine, the scope, and seriousness (excepting that darned seal) of 20,000 LEAGUES UNDER THE SEA arguably made it Disney’s first true “Hollywood” picture in terms of its maturity and technical innovation.

Even 57 years later, few movie scores have so beautifully conjured the ocean’s depths like 20,000 LEAGUES, with Smith’s lush waves of symphonic melody evoking a lyricism worthy of Debussy’s “La Mer” – as played within the context of a populist adventure spectacle. It’s also one of the most strikingly thematic scores to sail under it, captained by a grand melody for Nemo and his Nautilus. Making a monstrous first appearance in the “Main Title,” this raging, ramming speed melody will shift from the music of dark destruction to something nobler, if no less fearsome. For man and machine are musically one in Smith’s remarkable approach that captures all the emotional turbulence that James Mason brings to one of the screen’s great “mad” geniuses. Yet his actions are understandable, driven from a place of fiery grief that brings a brooding empathy to Nemo, much like such compatriots as Dr. Frankenstein and The Phantom of the Opera (particularly with a pipe organ that furiously blasts out Bach in “Nemo’s Torment”). When Nemo goes out with a bang against “that hated nation” in “Nemo Wounded” and “Finale / Deep is the Mighty Ocean,” Smith’s music laments to the heavens with the sound of a glorious anti-hero’s passing, operatically marking his passage in the best Wagnerian tradition.

While Nemo’s emotional storminess is integral to 20,000 LEAGUES, this is a Disney score after all. And counterpointing Nemo’s melodic tsuris is a playful theme for Kirk Douglas’ brash harpoonist Ned Land, who gets shanghaied aboard the Nautilus. Taken from the slightly salty sea shanty “A Whale of a Tale” (jauntily performed by Douglas himself), this whimsical melody is always on deck for pleasant comic relief in bits like “Street Fight” and “Ned’s Bottles,” while a sojourn “Ashore at New Guinea” gives Smith the chance to indulge in a bit of Bali High before a rollicking orchestra and a shrill surfeit of “Native Drums” chase Ned back to the Nautilus. Yet it’s also a show of Smith’s ability that Ned’s goldbricking theme turns to pure heroism as well. Smith music also makes us feel completely enraptured in the alternately wondrous, and dangerous journey of discovery that Ned takes aboard the Nautilus. And it’s during “Fifty Fathoms / The Island of Crespo” that Smith achieves the score’s purest, Debussy-like transcendence as glistening waves of strings and quizzical announcements of the fish around them convey an atmospheric sense of wonder- the true transference of music into a poetically liquid element.

Whether it’s the glistening strings of a sea walk, the angry brass of a giant squid or a desperately escalating escape from an army that’s just invaded Nemo’s island fortress, 20,000 LEAGUES UNDER THE SEA is pure boy’s adventure stuff, with a mature musical, and cinematic appeal that’s made this score and film an enduring Disney classic on all counts. And one boy who was there to witness the film’s creation is the now-grown composer John Debney (CUTTHROAT ISLAND), whose inspirational appreciation of Smith’s masterwork, and reminiscence of stopping by his own dad’s Disney gig long ago bring this LEAGUES CD even more enthusiasm. Though the soundtrack was previously on iTunes, there’s still nothing better than hard copy sound and a booklet filled with amazing behind-the-scenes stills. Many of which show Douglas trying his hand at the guitar for the numerous renditions of “Whale of A Tale” that are also included here as bonus tracks- including one sung by The Wellingtons, most famed for their vocals to GILLIGAN’S ISLAND. One can only imagine the possibilities with Bob Denver in the Douglas role.