Home » Book Review: WHEDONISTAS! A CELEBRATION OF THE WORLDS OF JOSS WHEDON AND THE WOMEN WHO LOVE THEM 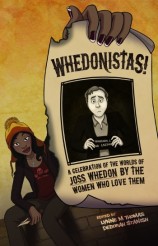 WHEDONISTAS! A CELEBRATION OF THE WORLDS OF JOSS WHEDON AND THE WOMEN WHO LOVE THEM
Reviews

Book Review: WHEDONISTAS! A CELEBRATION OF THE WORLDS OF JOSS WHEDON AND THE WOMEN WHO LOVE THEM

It’s rare, though not as rare as it was, for a writer/director/producer to generate a fandom all his/her own. It’s inarguable that Joss Whedon resides at the pinnacle of this group. Should the title of WHEDONISTAS! A CELEBRATION OF THE WORLDS OF JOSS WHEDON AND THE WOMEN WHO LOVE THEM need explanation, it refers to female fans of the man and his released work so far: the television series BUFFY THE VAMPIRE SLAYER, ANGEL, FIREFLY and DOLLHOUSE, the FIREFLY spin-off feature film SERENITY and the Internet musical miniseries DR. HORRIBLE’S SING-ALONG BLOG.

Editors Lynne M. Thomas (who with Tara O’Shea just won a Hugo Award for a previous collection of essays on DOCTOR WHO, entitled CHICKS DIG TIME LORDS) & Deborah Stanish have compiled a series of essays from a wide variety of Whedonistas, including a Lutheran reverend and an air traffic controller (to name two of the more esoteric professions), plus interviews with stalwart Whedon writing/producing colleague Jane Espenson and BUFFY/ANGEL actress Juliet Landau.

WHEDONISTAS! includes a fascinating array of topics and viewpoints, some of which wouldn’t readily occur to the reader.

In terms of analysis of the topic at hand and how it relates to a specific personal life, Sigrid Ellis’ “The Ages of DOLLHOUSE: Autobiography Through Whedon” is remarkably illuminating, discussing both the premise and dramatic personnel of DOLLHOUSE with great detail and originality. It’s the kind of piece that makes the reader want to rewatch the series with fresh eyes.

The title of Priscilla Spencer’s “Brand New Day: The Evolution of the DOCTOR HORRIBLE Fandom” is self-explanatory, but it’s still an interesting examination of fandom making a leap from taking place on the Internet to being about Internet content, as well as a thorough examination of the piece in question.

Emma Bull’s “Malcolm Reynolds, the Myth of the West, and Me” makes a strong case for how FIREFLY actually disproves the popular Western notion of isolation as a social ideal (Mal and his crew need each other – they are a small, mobile community, but a community nonetheless).

Heather Shaw’s “A Couch Potato’s Guide to Demon Slaying” is about equal parts analysis of various BUFFY details and how what was occurring on the series sometimes paralleled/informed what was going on with the writer’s rotating roommates during her college years. It’s a nicely BUFFY-infused piece of autobiography.

Nancy Holder’s “Ramping Up for a Decade with Joss Whedon” is a remembrance of set and office visits during her work on several volumes of the WATCHER’S GUIDE books, about the making of BUFFY, plus the ANGEL CASE FILES (making of ANGEL) and a quantity of tie-in novels, with an inclusive you-are-there feeling.

Jody Wurl’s “Shelve Under Television, Young Adult” is a discourse on how BUFFY and ANGEL have improved the lot of real-life professional librarians and Meredith McGrath’s “How an Atheist and His Demons Created a Shepherd” concerns how Whedon’s works helped her on her path to becoming a minister. It was mentioned earlier that some topics here are surprising, right?

There are also a number of specific character analysis pieces on Buffy, Willow/Dark Willow, Spike, Oz, FIREFLY’s Kaylee. There are explorations of where BUFFY and ANGEL fit within the tradition of vampire films and literature, how they adhere to/diverge from standards within romance fiction and how Whedon’s various works advance (or don’t) feminist principles on television. Teresa Jusino’s “Why Joss is More Important Than His ‘Verse” looks at Whedon’s political/charitable works outside of his creations.

As would be expected in a compilation of essays about Whedon fandom, there are also a number of paeans to the joys and benefits of fandom. Likewise, as is natural given that so many of the essayists are professional horror/sci-fi/fantasy writers, there are several pieces on how Whedon’s work has provided inspiration/guidance to some of the contributing authors in regard to their own creations.

No matter what perspective the reader has on Joss Whedon, his work and indeed the entire realm of narrative analysis, there is something here for everyone.