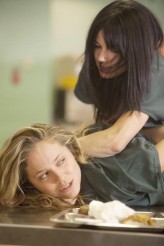 Last week's big threat is handled, but the handler creates a bunch more 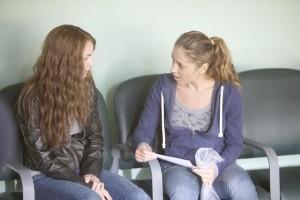 The “Treachery” episode of REVENGE makes you wonder if the writers haven’t written themselves into a corner, because it certainly looks like the wheels are coming off Emily’s big plot. The problem is, the show started at the end of the summer season with someone getting shot – and it sure looked like Emily was getting what she wanted and planned. So you have to figure the writers know where they’re going with the story and how they’re going to get there.

Before we go any further, we have to lay some ground rules here. We know that Emily Thorne (Emily VanCamp) is really Amanda Clarke, daughter of David Clarke, who was framed for a crime he did not commit by Conrad and Victoria Grayson (Henry Czerny and Madeleine Stowe) and all their buddies, hence Emily’s big campaign to wreak revenge upon them all. The problem is, the real Emily Thorne (Margarita Leveiva) switched names with the old Amanda Clarke, and she’s now on the scene, so since we’re calling Emily by her adopted name, we’ll call Amanda by hers. At least for this time out. So Emily is the fake Emily and Amanda is the fake Amanda.

And certainly, Amanda, who just happened to take care of the all-too-nosy Frank Stevens last week by bashing him in the head, has kind of helped, but at the same time created a whole new level of issues for Emily to deal with since Amanda isn’t exactly stable. Apparently, Emily is not extending her revenge to actually killing people. And, let’s face it, stiffs do tend to bring cops around.

So Emily stashes Amanda with her go-to guy Nolan (Gabriel Mann). In the meantime, Lydia (Amber Valetta), erstwhile mistress of Conrad, has awakened from her coma after falling off her roof, although her memory of the days leading up to the fall is gone. So Victoria does with her best friend who’s been sleeping with her husband what any scorned woman would do. She moves Lydia into her home to take care of her. Oh, wait. Since the late Frank had more than a little to do with Lydia’s fall, and Frank is pretty tightly connected to the Graysons, maybe it’s just as well that the Graysons are keeping an eye on Lydia.

And Daniel, who’s in love with Emily (and ostensibly she with him, but who really knows), has decided to give up bartending to console his dad who has been kicked out of the house. This doesn’t please Daniel’s school buddy Tyler (Ashton Holmes), who has been worming his sleazy little way into Conrad’s affections. So naturally, the utterly narcissistic weasel that he is, Tyler starts manipulating Victoria’s long-suffering assistant Ashley (Ashley Madekwe).

Emily manages to send Amanda away – or so she thinks, and herein lies the problem. Amanda is obviously one very loose cannon and even Emily can’t control her.

Overall, it’s a most intriguing episode with more questions than answers. The only problem is that VanCamp still hasn’t got enough range to do more than stare soulfully at the camera when it appears there’s more to the situation than we’re seeing. Granted, Emily is not supposed to be an easy read, but we, as the viewers, should have some clue as to where the real Emily is at, even if it’s a false one. Right now, we’re mostly getting the same flat response.

The rest of the show is so much fun, one can forgive a less than sterling performance. The soap suds be flowing, but that’s kind of the point of a guilty pleasure like this one.