With the season finale, you can see the strain with this uneven episode 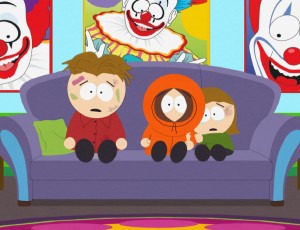 Part of being a SOUTH PARK fan is loving it one week and hating it the next. With “The Poor Kid”, the episode lands somewhere in the middle. There are a few laughs, a couple clever sight gags, but it’s clear the end of the season has worn down creators Trey Parker and Matt Stone and the result is not a very satisfying episode.

“The Poor Kid” focuses on Kenny and his siblings being sent to a foster home after his parents are caught and sent to prison for being white trash (it also doesn’t help that they have a meth lab in their back yard).

Of course with Kenny gone, Cartman doesn’t have a poor person to pick on anymore, so he and Butters do some research and discover that – drum roll – Cartman is the poorest person at the school now.

Not wanting to be one-upped, he rats out his mom by creating a faux meth-lab and gets sent to foster care as well.

The foster care house is run by a pair of Agnostic task masters who may believe or may not believe in God – they also believe in neutral soft drinks which is why they only have Dr. Pepper. It’s not quite root beer – not quite Coke.

We also get the return of Mysterion who protects Kenny’s little sister (and we know why now, don’t we?) The episode meanders all over the place throwing in as many Penn State jokes as posssible and then concludes with another one of SOUTH PARK’s Monty Python-esque non-sequiter endings. They tend to do that when they can’t find a satisfying way to conclude things. This happened previously this year with the “Bass to Mouth” episode.

I did like the “soft room” at the police station that the potential foster care kids are taken to in order to ease the transition – it features really scary paintings of clowns. Hilarious sight gag. Some of the Agnostic jokes work too.

Still, “The Poor Kid” doesn’t have enough to really stand out. The story is a bit of a mish-mash, and it’s clear they’re struggling with a way to shoe-horn Penn State gags into the show, without really commenting on it in any really meaningful way.

This being the Season 15 finale, it’s a shame more wasn’t put into this finale. After the brilliant midseason finale of “You’re Getting Old,” this end game is a bit of a letdown. Maybe “A History Channel Thanksgiving” should have been the final episode.

Still, I’ve gotten more satisfaction out of Season 15 of SOUTH PARK than any other series this year. It’s had its up and downs, but it’s highs have provided some of SOUTH PARK’s best episodes yet.

It only makes the long wait for Season 16 in April even harder.