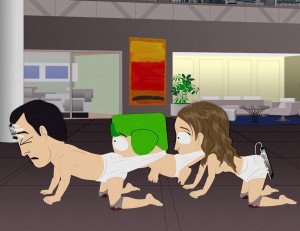 It’s impossible to know where SOUTH PARK creators Trey Parker and Matt Stone are going to go next. Each half season can go from brilliant to uninspired within a week’s time, but the joy of the show is the surprise and anticipation of what they’re going to skewer and spoof next.

With their Season 15 premiere (yes, Season 15), they hijack the premise from the cult horror movie THE HUMAN CENTIPEDE and graft it on to the current technological innovations that Steve Jobs has engineered for his Apple products.

Hence, it’s yet another dig at the iPad, iPod, iTouch phenomenon, but it’s done in such a clever (and sick way), it’s a perfect kick-off to a new round of episodes.

With everyone at school getting iPad’s, it’s clearly the new South Park craze. However, Cartman has been pretending he has an iPad (it’s glass taped to an iPad cover), and demands that his mother take him to Best Buy to purchase one. When he causes a scene and yet again verbally abuses his mother, she finally steps up to plate and punishes (something that rarely happens on the show). Cartman one-ups her by taking his gripe to Dr. Phil claiming sexual abuse.

Meanwhile, Kyle gets into trouble with Apple because he didn’t read the terms of use document when he signed up for the iPad. He clicked “agreed” without ever reading it and now, because of it, he’s given Apple permission to use him in a HUMANCENTiPAD experiment which promises to be the next big technological craze.

For those unfamiliar with THE HUMAN CENTIPEDE, it’s essentially about three people who are fused together mouth to butt and forced to live through the other person’s feces (here, the concept also includes technology). It’s a sick movie, and it’s no less sick on SOUTH PARK, but this fringe movie provides some humorous fodder and yet again pushes the boundaries of good taste (which Parker and Stone love to cross all the time).

There are many great movie references throughout, but perhaps the funniest bit includes Kyle’s dad going to the Apple “Genius Bar” to find a way to help his son. “The Quickening” is one of the end results (alluding to the HIGHLANDER movies) and it is absolutely hilarious.

While the Cartman B-story is okay, the pay-off with him getting a free HUMANCENTiPAD which also includes Kyle having to eat fecal matter is quite funny.

Keep in mind, this first episode back doesn’t mean the rest of Season 15 will soar with the same creative high, but it definitely bodes well that the boys are back, focused and ready to take on pop culture like no other animated show can.