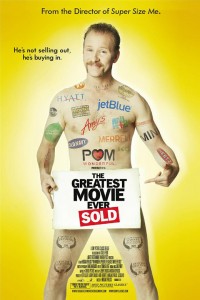 With POM WONDERFUL PRESENTS THE GREATEST MOVIE EVER SOLD, documentarian Morgan Spurlock tackles advertising in movies head-on in this very funny look in how movies and television shows sell out every day (including Spurlock himself).

In Part 2 of our exclusive interview, he discusses advertising, independent films and the state of documentary films.

ASSIGNMENT X: Do you think advertising is evil?

MORGAN SPURLOCK: I don’t think advertising is inherently evil, but I hate the way that it’s used, and how it’s questionably put into certain places like schools. That absolutely should not happen.  I think there are places where you should be free from some level of advertising. I’m using the bathroom, I look up, and there’s a video screen literally right in front of my face.  Do I really need to watch a TV commercial right here, right now?  I was kind of floored by that, but literally that’s where things are going.  If there is a place where someone is a captive audience, you can bet your bottom dollar somebody is going to start advertising there.

AX: There’s a great part in the film where the Sheetz Restaurant owner asks you if you think everyone in America are idiots.  Do you think that’s increasingly becoming the case?

SPURLOCK: Stan Sheetz is fantastic in the film, and he’s making a point that everybody already knows this is out there. It’s that we do live with blinders on. We accept what we’re told. And what this movie does is to pull back the curtain and show you the deceptive conversations that you’re not privy to about products, and how marketing is in front of you, no matter where it is. By watching THE GREATEST MOVIE, your eyes open to a completely different way of looking at things.

AX: You’ve got two gentlemen in GREATEST MOVIE who definitely bring some controversy with them. Ben Silverman arguably sunk Conan O’Brien before he got dumped by NBC. Then there’s Ralph Nader, whom many people think sunk this country with his presidential run. What do you think of that?

SPURLOCK: There are people who have said Morgan Spurlock is the cause of the downfall of documentary filmmaking. So it sounds like that’s perfect. As for Ben Silverman, 30 DAYS never would have been put on television without him and R.J. Cutler at Actual Reality Pictures. Ben and I have known each other for a very long time. Now Ben is going off and starting this new company that’s all about “branding entertainment,” where he’ll get companies to foot more of the bill for productions. Because that’s exactly what we’re talking about in the film, I thought Ben was somebody who would have a real, relative voice. Ralph Nader is a consumer advocate who’s fought for the little guy for decades.  So I thought, whom better to weigh in on where we are as a society? The interview with Nader is literally one of the greatest things I’ve ever shot. His personality comes off great, especially with the way he carries himself. He has such an incredibly humility, and a fantastic sense of humor.

AX: Do you think though, on the other hand that branding could get smaller, independent films made that normally wouldn’t get the funding?

SPURLOCK: I don’t know if it’s essential. You have to realize that most companies and brands would never support a smaller movie, simply because of their size. They’d rather give more money to IRON MAN because they know it’s going to be seen by millions of people around the world. They might give an indie movie fifty thousand dollars. But at the end of the day, who’s going to watch it?  That was a hard sell for ourselves in getting GREATEST MOVIE made. We literally called between five and six hundred companies after nearly all the ad agencies wouldn’t help us. Then we started calling the brands directly, hundreds of whom said “no.” Being a small movie was one of the reasons, while being a documentary was the other. Being me was a third. Now maybe after a film like this, there’s a possibility that brands might think there’s a possibility in giving smaller movies something like twenty-five grand. Why couldn’t they have a character with a Taurus in their driveway? Who knows? But I don’t think they make Taurus’ anymore.

AX: The commercials within the film shot in a very slick way that’s very different from the rest of the picture.

SPURLOCK: That’s because we literally made a point to shoot them like commercials with the Sony F900 and the SRW 9000, which are the next generation cameras in full resolution HD.  They produce a pure, raw image, whose every color and frame you can manipulate. That gives you an incredible palette to paint with when you go into the post production process, which gives the commercials the rich texture of 35 millimeter film- which in turn looks just like a “real” commercial. That was one of the goals at the beginning. 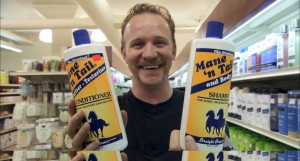 AX: Well, if you ever decide to give up documentaries I think you could become the next Joe Pytka.

SPURLOCK: Mom always said you have to have something to fall back on, right?

AX: I was a big fan of your TV show 30 DAYS. Yet there also seemed to be a “formula” at work that made nearly everybody in the episodes see somewhat eye-to-eye by the end.

SPURLOCK: Well, they weren’t shaking hands at the end of the gay parenting episode. That one got pretty tense. There was so little change from this woman from California who went to Michigan to stay with these two gay dads. She came from an adoptive family herself, yet was so against these guys raising a family. It was remarkable. Even by the end when she saw the home and the love that these guys were giving to these adoptive children, she still remained vehemently against gay adoption and to the point of disgust and anger.  It was remarkable.  For me, I don’t know how you could ever argue that, “Yeah, you’re right. An orphanage is such a better place for these kids.”

SPURLOCK: It’s a shame.  After we did three seasons, 30 DAYS, it just got very expensive.  We were on the FX network, and we were their only “reality” show. It’s hard to win a battle when you’re constantly being compared to the budget and numbers of their scripted fare. But ultimately, it’s about how shows like RESCUE ME or NIP/TUCK were pulling in five million viewers a week, and we were getting a million and a half.  The fact that we got to do three seasons of a show like 30 DAYS is remarkable.

AX: You don’t have to worry about what your seeing is the truth in your projects, but now with stuff like CATFISH and EXIT THROUGH THE GIFT SHOP it seems like there’s a whole new genre of “fake” documentaries. What do you think of that trend?

SPURLOCK: When I saw CATFISH at Sundance, I said to the filmmakers, “If what happened in this film really happened, it’s remarkable, but if what happened didn’t, it’s the best fake documentary I’ve ever seen.” CATFISH is such a great comment on social media.

AX: But don’t you think documentary audiences deserve the real thing. Isn’t it dangerous for them to get potentially lied to like this?

SPURLOCK: There is a line that’s blurring for documentary filmmakers. Werner Hertzog said that every cut is a lie in a documentary- that every time you change the camera angle, you’re literally manipulating your story. The only way you’re going to get a “true” cinema verite story is to shoot something in real time for two hours. Ultimately, I think there is a way to tell stories that are honest with the audience. When I was a kid and I got caught in a lie, my father would say to me that there were three sides to every story.  There’s your story, there’s my story and then there’s the real story.  And ultimately, what I really try to do is tell the real story.

AX: Do you see yourself making the move to fictional filmmaking, a la Michael Moore’s CANADIAN BACON?

SPURLOCK: I’m itching for the chance to make my CANADIAN BACON.  Hopefully that will happen soon.  I was approached after SUPER SIZE ME to do a bunch of comedies because people felt that movie was funny. So I was getting sent all these terrible scripts, including a REVENGE OF THE NERDS remake, as well as a DEUCE BIGELOW film, but I told them that I really want to do something in the line of a THANK YOU FOR SMOKING.  Something that’s funny, while also being smart and having something to say.  Now I’m attached to a film we’re raising the money for that will be like that. It’s a very ERIN BROCKOVICH type of story, which is exactly the kind of a film that I want to be my first movie.

SPURLOCK: Luckily it’s one of those things that I like drinking, so it’s not so bad.  If we had a brand signed on that I couldn’t stand, it would be a lot harder. In fact, I have a POM fridge in my office, sitting right next to my desk!