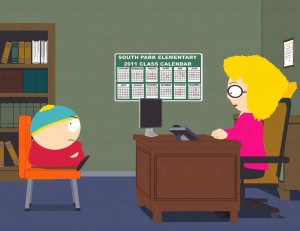 Last week I was equally praised and crucified by readers for my scathing review of the SOUTH PARK episode “Royal Pudding”. It was a horrible mess with a funny gags and not much else. Sorry.

Thankfully, this week’s episode “T.M.I.” is a much better effort (still not perfect, but good), keeping things simple and bringing the inspired lunacy that makes SOUTH PARK so great.

When the South Park faculty decides to post how much each student has grown in size during the year, Cartman mistakes these numbers as list of everyone’s penis size. He’s outraged by this and demands a recount, since he’s listed as much smaller than everyone else.

This results in him doing his own measurement of the entire South Park class and posting those results. This gets Cartman in big trouble and he ends up in an anger management class with other people who have “penis” issues.

The episode soon devolves into a whole spoof on the Tea Party movement  and their random, non-sensical agendas with Randy Marsh leading the rebellion by taking taking down the local Federal Express (not realizing it’s not affiliated with the Federal government). Very funny. This movement also targets American Apparel and American Airlines.

Other highlights from the episode, include Randy teaching a class on TMI which is a system that accurately measures penis size – which includes some hard to understand mathematics. Butters also talks about TERMINATOR 5 where the Terminator (aka Arnold Schwarzenegger) goes back in time to father his own child and where Skeletor gets pissed off at the Terminator (Skeltor being Maria Shriver). He doesn’t realize this is reality, not a movie. Pretty funny stuff.

Granted, while this episode was pretty good, like the last two episodes, it has a few rough spots. There seems to be a kitchen sink approach to SOUTH PARK as of late. Creators Trey Parker and Matt Stone seem to be throwing so much at the wall at a given episode, some of the impact of the humor tends to get lost amidst all the clutter.

Whatsmore, if the faculty was posting the growth size of the students, why would they only post the sizes of the male boys and not the females? It’s a small detail, but significant enough to be annoying when it comes to their usually crackerjack storytelling.

I also noticed that Comedy Central is not bleeping the “s” word anymore, showing how far basic cable has come since SOUTH PARK first made its debut on the network 15 years ago.

“T.M.I.” is funny and crude. It may not be as hilarious as the season premiere, but it certainly blows both “Funnybot” and “Royal Pudding” out of the water. Let’s hope next week is even better.