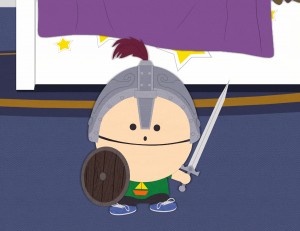 I’m all for SOUTH PARK when it likes to mix things up and spotlight secondary characters. However, when it’s done as poorly as “Royal Pudding,” it makes you wonder what creators Trey Parker and Matt Stone were thinking.

With last week’s “Funnybot” being a bit of a mess, “Royal Pudding” fully commits to being an outright disaster by essentially being a one-note SATURDAY NIGHT LIVE skit that drags on for thirty minutes.

The potential for humor is here – essentially a spoof of England’s Royal Wedding, but transplanting the hype and television coverage to Canada where everyone says “aboot” and the cars have square wheels.

Ike, Kyle’s adopted step-brother, happens to be Canadian and is obsessed with the Canadian Royal Wedding that has such rituals as dipping the groom’s hands in butterscotch pudding (with the bride wiping it off) and throwing Cap’n Crunch cereal instead of confetti.

Some of the bits of the television newscast of the wedding is actually quite funny, with a handful of clever zingers. However, mid-ceremony, the princess is frozen in a block of ice and taken away by some mythical creature. This requires all Canadians to open up their Box of Faith and head to Canada where they will fight to save their princess.

Ike joins the fight and goes on an adventure that leads to a pretty weak pay-off.

Back at SOUTH PARK, Mr. Mackey is concerned that his play on tooth decay isn’t going very smoothly, especially with Ike AWOL. This turns into a crazy, profanity spewing director in hopes of getting things perfect.

The biggest laugh of the entire episode comes during at the end between the prince and princess during the last part of their wedding ceremony. It’s so morbid, outlandish and over-the-top, it proves to be a welcome respite from the episode’s otherwise strange and unfunny road trip Ike takes.

It always pains me when SOUTH PARK episodes don’t live up to their potential, and unfortunately “Royal Pudding” takes all of Parker and Stone’s one-note Canadian gags and tries milking them again for the 1000th time. It was funny the first time, now, it’s very stale.

“Royal Pudding” is a small gag in search of an actual story that never quite comes together, but I’d rather have Parker and Stone try and fail with their 15-year old Comedy Central series, than playing it safe any old day.