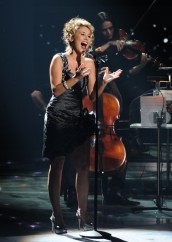 We are down to nearly the home stretch on the world’s greatest karaoke competition, AMERICAN IDOL.

And lucky the theme of the night was not Randy Jackson’s “Who is in it to win it” but more about the home stretch and who will either falter or bring home the bacon.

Each four contestants sang two songs again tonight: The first, songs that are meaningful to the contestants; the second, songs from the writing combo of Jerry Leiber and Mike Stoller with help from Lady Gaga as the mentor this week and like Sheryl Crow did a very good job helping the contestants out, unlike say Babyface or Will.i.am, who did nothing.

James Durbin – The first set for James comes from a song that he associates with his IDOL adventure – “Don’t Stop Believing” by Journey. While the song has been overdone and driven into our pop culture by a lot of different programs, most notably (and unfortunately) by GLEE, this version was much better. James can sing the phone book as the judges love to say and he nailed it. My only thought is that it was a bit safe, but I think James is safe in terms of making it to the next round. Plus, the song is so well known, people will say “Oh yeah, I know that song” and give him their vote. Grade: B

Haley Reinhart – I’m not a fan of Michael Jackson, but luckily, there was really nothing in Haley’s version of “Earth Song” that I could find from the King of Pop. Haley used the song to not only show a softer side of the growling, powerful singer but also to show that she can bring it up and belt it out. She also proves that she definitely deserves to be in the Final 4. The only issue may be that it is a song that a lot of people won’t know. Unlike James’ song, that EVERYONE knows, not a lot of people may know this tune and that’s a problem – and the judges harped on her about it. And when did Steven Tyler grow a set and actually give a differing opinion? Grade: B-

Scotty McCreery – Scotty definitely is pulling out all the stops in order to make it to the next round and once again has pulled out an excellent song choice in “Where Were You (When the World Stopped Turning)” by Alan Jackson. And he nailed the song as only he can by playing to the patriotic nature in all of us Americans. Plus, with a little someone getting caught and killed recently, the Sept. 11, 2001 song makes an even stronger impact. The only issue is, can the live-action Alfred E. Newman garner enough votes from the others to stay? He’s been in the bottom the last two weeks and while he’s a great singer and is choosing the right songs, there may not be enough voters of his type of music watching to make him the winner. I, of course, could be wrong. Grade: B

Lauren Alaina – Is Lauren rattled by the fact she was in the bottom two last week and was this close to going home? She didn’t show it while singing Martina McBride’s “Anyway” – once again going back to her country side. She had some really good moments during this performance where her voice was amazing and showed just why she has made it this far in the competition. But, like Scotty, can she garner enough votes to stay over Haley, who seems to have taken over the mantel as the favorite female on the show? We’ll see. Like Haley, however, while some people may know this song and love it, I had never heard it before but, granted, I don’t like country music. That said, the vocals were awesome and maybe one of her best performances of the season. Grade: B+

Haley Reinhart – After getting lambasted by the judges for basically picking a song no one knows, she went with “I (Who Have Nothing)” by Shirley Bassey and it was freaking fantastic. Not only did Haley look amazing but the arrangement was great with a full orchestra up there and her at a microphone just belting out the song just worked. I wasn’t sure that Haley could follow up on her awesome performance from last week where she stole the show at the end, but I think she did it with this one again. Holy crap, the girl has turned up her performance 200 percent and is going for it with everything she’s got. If that song doesn’t keep her on the show another week, I don’t know what will. Grade: A

Scotty McCreery – Oh boy. Why on Earth would Scotty go with “Young Blood” by The Coasters and perform it the way he did? It was beyond hokey. It was just bad. The moment he hit the stage for the second time, I thought that not only was he completely out of his element, but that he was in trouble this week. To go from such a great song choice in Alan Jackson, to this terrible, terrible song choice with a terrible, terrible arrangement is just mind boggling. I know Lady Gaga tried to loosen him up but wow seriously that was just bad. I have no clue what the judges were watching, I think Simon Cowell would have called it high school musical worthy (not the Disney version). Grade: C-

Lauren Alaina – Lauren comes out wearing a jacket last worn by Elton John I believe. Luckily, she doesn’t sing like him. Once again, however, not sure that “Trouble” by Elvis is the best song choice and the arrangement has Lauren was all over the place, circling the stage and being crafty or flirty or something not in her wheelhouse. If Simon Cowell was on the show he’d no doubt say it came off as very cruise ship karaoke. Her first song was so much better than this one and I question the song choice aJust a side note, does anyone else get a bit creepy vibes when Steven says he loves Lauren? Just me? Grade: B-

James Durbin – From Journey to The Clovers’ “Love Potion No. 9”, like I said, James can sing anything but he’s definitely the best overall performer in the group – something that is maybe more important than the actual singing aspect (as long as it isn’t cheesy). Not sure if this was as good as his first performance but it definitely rocked and had the crowd motivated. I don’t think James has anything to worry about this week and at this point is a lock for the finals. Grade: B

So who is in the bottom two this week? I think it will be Scotty and Lauren, with Lauren going home. I think Haley cemented herself with fans with her second song and James is just solid week in and week out and deserves to be in the finals at this point. But, as always, I could be (and frequently am) wrong.