After last night’s strange episode of AMERICAN IDOL – Season 10, where the Top 4 contestants sang two songs apiece (one that inspires, the other from the Jerry Leiber/Mike Stoller songbook), it was clear the judges are still all over the map when it comes to criticism and what an IDOL should exactly be (okay, one map, everyone is great EXCEPT Haley).

While James Durbin, Lauren Alaina and Scotty McCreery have gotten pretty much a free ride to the Top 4 with nary a critique (especially when they blow hard), Haley Reinhart has had to claw her way into her position by her talent, guts and ability to truly out-sing all the other contestants.

Why does she have to try so hard – because the judges are always ripping on her (they say it’s for her own good). And yes, maybe occasionally it’s deserved, but when they don’t level the same kind of criticism on the others, it’s clear they’re picking on her and want her out.

Oh how I miss Simon Cowell’s biting sarcasm and usually dead-on voice of reason critiques. At least it evened the playing field a bit (and nine times out of ten, he was right).

However, one of the things that is very important and is repeated over and over again on the show is how IDOL is looking for the next big superstar and recording artist.

See, a popular recording artist is different that being in a popularity contest on a reality show. Just ask the last two IDOL winners Kris Allen and Lee Dewyze, whose post-IDOL album all but tanked. Yes, they’re talented and good performers, but do people really want to shell out many to buy their music once the IDOL glitter fades? The answer of course was a bit “NO!”

Thankfully, IDOL releases studio-produced songs of all the contestants, so you can hear a whole other side to them. I also think they secretly do this to see who has studio chops as well.

With that in mind, I thought it would be interesting to dissect last night’s songs – no based on their IDOL performance, but by their studio performance which can be downloaded directly from iTunes. 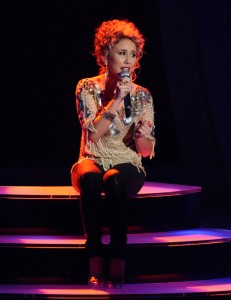 HALEY REINHART
Consistently, over the last several weeks, Haley has sounded the best in the recording studio. The biggest reason is the quirks in her voice make her sound wholly unique, as opposed to someone like Lauren who is absolutely vanilla. Her performance of “Rolling in the Deep” is still one of my favorite IDOL downloads all year (and I also totally love Adele’s version too).

As for Top 4 songs, her inspirational choice of “Earth Song” by Michael Jackson actually sounds 100 percent better in the studio. I was never a fan of the Jackson song, and on the show, she did scream a little too much toward the end, but the studio cut is divine. Even better than the Jackson cut (and that, sadly, is pretty easy to do since the song quite honestly sucks in comparison to his other music). Her second choice from the Leiber/Stoller songbook “I Who Have Nothing” is earth-shattering good.

And here’s exactly the reason why she should win IDOL. She took a Leiber/Stoller song and turned it into something modern and commercial – unlike James, Scotty and Lauren’s selections which sounded almost too retro and cheeky.

The judges tend to criticize her song choices for being too obscure, but then again, how many regular IDOL viewers who aren’t into country music have heard most of the songs Scotty or Lauren have sang?

I think if you put the last three weeks of Haley’s  performances together, you have a pretty consistent and solid album any artist would be envious of – and primarily because Haley made these songs her own. 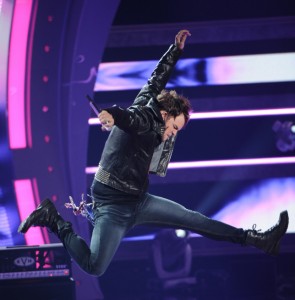 JAMES DURBIN
James is a tough one, because the guy will likely have a very successful career if he’s paired with the right songwriters/producers post-IDOL. The boy can sing. I know there’s a ton of Adam Lambert fans that think James is just a wannabe, but I disagree. They’re two completely different performers. Both can hit the high notes and both know how to reinvent music to fit their voices, but they are different in all other respects.

As for last night’s songs, “Don’t Stop Believin’” surprisingly sounds a lot like the Journey song. Both production-wise and Durbin’s crystal clear vocals. He sounds really good on the track, but, the problem here is he didn’t do much to the song to make it his own. You don’t want to mess with greatness, but, if you had the choice to download the Journey version or James’ take, you’re going to go after Journey.

Still, match this dude with the songwriters from Journey, and who knows what kind of magic could happen.

The second song was the metal-ized version of “Love Potion #9.” Is it good. Yes and no. It sounds like throwaway bonus track from a 1980s hair metal band. It’s not current and really, probably not the best Leiber/Stoller track to re-invent. Haley made her selection current, Durbin just added heavy guitars and called it day.

As a recording artist though, there’s no denying that Durbin is ready to create a  kick-ass album (that is if the producers let him do it).  And unlike Lambert, I will put money down that his first album is much better consistently than Lambert’s (which was over-produced and all over the map stylistically). 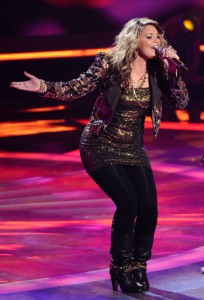 LAUREN ALAINA
I know Lauren is young, and she’s just finding her chops, but she’s just so bland. She fit splendidly in the country music milieu, but can you separate her from any other female country artists? What makes her unique? Why should someone buy her album other than being on IDOL? Maybe it doesn’t matter.

Granted, when she does a ballad like “Anyway,” she does shine. She has emotional weight, but when she steps outside of this comfort zone, she has a hard time connecting. “Anyway” is definitely up there with “The Climb” as her best two performances download-wise. Excellent, but a whole album of ballads won’t sell for your first time out.

Why she would attempt to cover the song “Trouble”, especially when she didn’t connect to saying the word “evil” is all her fault (unless the song was forced down her throat by the producers). She sounds awful on this – bad karaoke as Simon Cowell used to say. She doesn’t have the age or danger to pull this off. And her voice sounds tinny throughout this track. Plus, when the song picks up at the end, she falls totally apart – she sounds like she’s trying to go toe-to-toe with Haley’s trademark growl, but comes up short. In a sing-off, Lauren would lose. 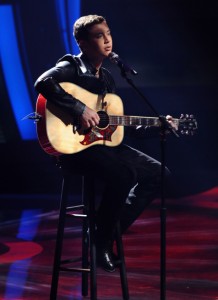 SCOTTY McCREERY
I think the judges have stopped trying to critique Scotty, because how do you criticize the kid who has that rich, deep baritone voice staying true to what he is only capable of doing? It’s clear, you put him in the studio, have him cut some obscure country tunes, and he will be one of the biggest IDOL contestants ever (whether he wins or not).

However, that doesn’t let him off easy. This is about studio production and how it comes off without the IDOL stage.

The Alan Jackson song “Where Were You (When The World Stopped Turning)” is solid country corn – uplifting, spiritual and positive, but did he add anything different than the original Jackson song? Not really. Does he sound great in the studio. Hell yes.

As for “Youngblood” the song sounds as bad as it did last night on the show. Awful. Like Lauren, this is not the right song for him. Yes, it uses his deep baritone, but it’s not current. He didn’t put a true country spin on it (there’s a slight twang, but that’s it), nor did he elevate what was done with the original track. Scotty knows what he’s doing most of the time with his song selection, especially when he stays true to his country roots. When he tries to stretch, he always falls on his face, so the key for him is to stay gold (yes, that’s an OUTSIDERS reference).

So who is the true winner. Well, it’s Haley. She is the recording artist. She’s the total package. She knows who she is now, and she’s showing it on these two tracks. Check them out, compare them to the others, and it’s clear both her and James should be in the final two. But as things are with most IDOL things, this is probably not how things are going to shake out in the end.