A good idea that strangely doesn’t deliver on the funny ... but maybe that's the point 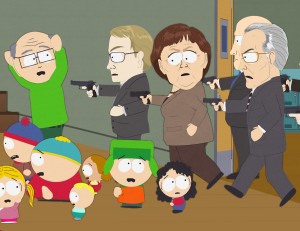 Every once and awhile, SOUTH PARK will tackle a topic that just doesn’t quite hit the mark and “Funnybot” is one of them.

When the Jimmy and the special education class put on the 1st Annual Comedy Awards, trouble erupts when Germany is named the least funny people. They get so incensed, they build a robot that tells vulgar jokes to prove the world wrong.

Of course, the robot is terrible, but everyone loves him anyway, until it decides the biggest joke on humanity is to destroy it.

Like many SOUTH PARK episodes, it takes awhile to figure out what exactly they’re trying to lampoon with this episode, but clearly, Funnybot is thinly veiled attempt to poke fun at Charlie Sheen and his attempts to go out on tour without any “real” material.

Tyler Perry is also parodied as one of the only celebrities who showed up to accept his comedy award at the South Park school. The problem is, Perry won’t leave and the only person who thinks he’s funny is Token. He subsequently keeps giving Perry money for making him laugh at his ridiculous humor with Cartman saying, “Token, stop giving Tyler Perry money or he won’t go away.”

Anyone who doesn’t understand why Perry and his Madea movies are so popular, will appreciate the jabs creators Trey Parker and Matt Stone take at Perry. It’s the most consistently funny bits in the entire episode.

The Charlie Sheen skewering is rather tame in comparison to things the show has done in the past. The allusion to Sheen is so abstract though, many people may not even see the Sheen correlation.

The biggest problem with the episode is that Funnybot destroying the world as the ultimate joke is almost too cerebral a concept. Maybe that was the intent, but
I was hoping for a little more edge.

I guess after such a home run that was last week’s season premiere “HUMANCENTiPAD”, it was inevitable that the follow-up wouldn’t be as good. Granted, even weak episodes of SOUTH PARK are funnier than most new network comedies, so it wasn’t a complete wash, but the bar has been set so high with the season premiere and the 14 seasons before this, that when the occasional misstep takes place, all can usually be forgiven.