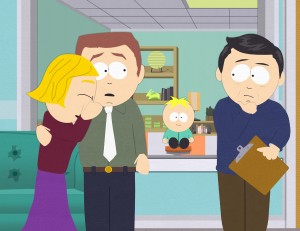 After last week’s dreadful “Crack Baby Athletics Association”, the series finds a way to redeem itself in a big way putting the focus on Butters which always seems to provide ample laughs.

Butters is one of the few innocent characters in the city of SOUTH PARK, so when he gets involved in strange predicaments (the pimp episode anyone?), it usually provides something refreshingly different.

This time, Butters is innocently handing out fliers for a new restaurant in town – City Sushi, which is right next door to City Wok. The heavy-accented owner of City Wok is furious that a Japanese restaurant would move in next door to his Chinese restaurant and a fight between owners ensues.

This gets Butters in trouble, and the police bring him home for inciting an “Asian turf warf

This results in a very funny pay-off at the end, which I won’t spoil here. Suffice to say, it’s one of the more well-thought out episodes since the season 15 premiere “HUMANCENTiPAD.”

Creators Trey Parker and Matt Stone send up a whole assortment of things here – including dealing with Asian stereotypes (with the City Wok owner clearly the biggest offender of all). It’s the spoof of horror movies where the episode really excels, particularly the PARANORMAL ACTIVITY nod where Butters web cams himself as he sleeps to see why he keeps peeing his bed.

The satirical nods to parents over-reacting to kids having an over-active imagination and doctors wanting to medicate instead of treat patients is also a dead-on indictment as to what is wrong with society today. It gets more and more ridiculous as it goes along, but it all stays true to the core story.

While the “Asian turf war” plotline looked like it was going nowhere, thankfully it does have a point that wraps into the rest of the episode (and some of the silly stuff that does happen between the two restaurants is actually pretty funny).

One of the more enjoyable things about SOUTH PARK, is the random occasions when Parker and Stone decide to focus an entire episode on supporting player. It’s usually then when they come up with really clever material – “City Sushi” being a case in point. It’s been a yo-yo of a season so far, but I’m glad they finally hit another near-classic out of the park with this one.