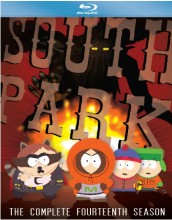 Not only did SOUTH PARK kick off its 15th season on Comedy Central last week, but SOUTH PARK: THE COMPLETE FOURTEENTH SEASON hit DVD and Blu-ray corralling all 14 episodes of another solid (and controversial) season of animated hilarity.

The series is set in South Park, CO and follows the foul-mouthed misadventures of Cartman, Kyle, Stan and Kenny. The genius in the show has been how creators Trey Parker and Matt Stone have continually found a way to stay relevant and edgy without diminishing the quality.

Yes, some times the show goes too far. Yes, sometimes it meanders. Yet, when it’s on target, which was throughout most of Season 14, it proves to one of my the most satirically daring and hilarious shows around.

The other amazing thing about the series that most non-fans don’t realize – these animated cartoons are written, produced and aired all within a week’s time. That allows the show to be topical when need be and brings a sense of SATURDAY NIGHT LIVE’s “let’s put on a show no matter what” attitude to a medium that normally doesn’t have that kind of creative leeway (and ability) in the animated medium.

The first half of Season 14 was super-strong and also hit that magic 200th episode.

The premiere tapped into the last year’s recent Tiger Words controversy of his wife discovering he was sleeping around and then de-volved into the South Park kids being diagnosed as sex addicts. As always, the show an easy target and then pushes it to the extreme.

Banned books are tacked in the very funny “The Tale of Scrotie McBoogerballs” that results in the kids attempting to write a banned book of their own – and end up becoming popular for it.

“Medicinal Fried Chicken” is one of my two favorites of the season as it deals with medicinal marijuana use and buildings that sell it – while Kentucky Fried Chicken’s are outlawed for promoting obesity. It gives Parker and Stone a one-two punch when it comes to social commentary and the gags are hilarious.

The other episode which I absolutely love is “You Have O Friends” which tackles the social networking phenomenon. What starts off as a simple, funny gag soon turns into Kyle being sucked into Facebook ala TRON and having to fight his way out. When the show can start off in one direction and veer into something equally as funny and unexpected is when it’s at its best and “You Have 0 Friends’ pulls this off with flying neon colors.

When SOUTH PARK hit episode 200 (called “200”), it resulted in a two-part controversial episode that brought back every single celebrity character that had been skewered in the past. These celebrities file a class action lawsuit against the town and soon, the prophet Muhammad is once again part of the mix too. When Islamic fundamentalists were out to get Parker and Stone (and its parent company Viacom), the second episode eliminated any reference to him (against the wishes of the creators). It was a highly censored episode that initially seemed part of the joke, but, as Parker and Stone mention in the commentary, it was not the case at all. And, the censored version is what appears here on DVD.

The drama surrounding “200” and “201” led into the conclusion of the first half of the season with the just as offensive and equally as funny “Crippled Summer” which featured Jimmy and Timmy at summer camp, while Towelie tries to deal with his drug problems.

The second half of Season 14 avoided political hot buttons, and instead seemed to focus more on parodies of reality shows and last summer’s hit movie INCEPTION.

The oasis of the entire season was an ambitious three-part episode following Cartman’s superhero alter ego The Coon and his new superhero group dubbed Coon and Friends. When the BP oil spill cannot be contained, a rip in time/space opens up a portal to another dimension where the H.P. Lovecraft dark lord Cthulhu rising to destroy our earth. This is an epic episode filled with incredible animation and an overly-ambitious plot that finally reveals a major secret as to why Kenny continually dies (and comes back to life).

The Blu-ray transfer of all the episodes is superb – they look incredible considering how low-tech the show sometimes is. The Bonus Features are kept to a minimum, as usual. There are a handful of deleted scenes (some completed, others storyboarded). Nothing is too incredibly funny in them, and they were rightfully cut from the episodes. The Bonus episode “The Coon” from Season 13 is also included to help set up the three-part “Coon” sequel.

The special features highlight though are the “mini-commentaries” on all episodes by Parker and Stone. In less than five minutes per episode that run through the major beats/problems in their usually candid and sarcastic way.

It’s great to hear them talk about the “300”/”301” controversy, and they even manage to throw in one more gag (or maybe it isn’t) which appears to be the final word on the subject. They are also forthcoming on the “Insheeption” episode which found them accidentally cribbing some gags from an online INCEPTION spoof. The fact that they’re so open and honest about anything is one of the reasons why their comedy remains so sharp and keeps their humility in check.

No other show on television has been able to craft such groundbreaking comedy in the animation field and still be consistent as SOUTH PARK. For 14 years, Parker and Stone have taken an edgy little Comedy Central show that was designed to push the boundaries of animated comedy and honed it into an institution that’s just as relevant and timely as SATURDAY NIGHT LIVE. They may not hit a home run out of the gate every time, but as THE COMPLETE FOURTEENTH SEASON proves, their hits are far more consistent than their misses which is more than most TV series can say in the entire series runs.