©2011 Comedy Central
Mr. Garrison and someone claiming to have Indian blood on SOUTH PARK - Season 15 -
Reviews 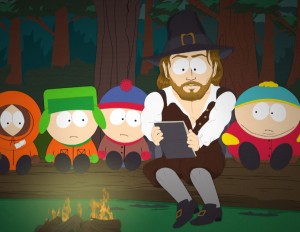 Kenny, Kyle, Stan and Cartman are schooled in the truth about Thanksgiving by hero Myles Standish on SOUTH PARK - Season 15 - "A History Channel Thanksgiving" | ©2011 Comedy Central

It’s that time of the season where SOUTH PARK drops the politics and current events and just gives in and gets silly. This year it’s with the hilarious episode “A History Channel Thanksgiving.”

Absurdity progresses as that special gets updated to include the notion that maybe pilgrims and Indians were actually aliens themselves.

Things continue to get more outlandish when the episode parodies THOR – positing that the Indians and Pilgrims live on different worlds and their peace treaty has made it possible that humans to receive stuffing on Thanksgiving every year. And now ancient Plymouth pilgrim warrior Myles Standish (in THOR-like regalia) is headed to earth to save the day.

SOUTH PARK hasn’t done something quite like this in some time. It’s a very ambitious episode in scope and size, but it’s the simple storytelling and concept carries it throughout.

All the digs at the History Channel are right on and there’s even a great Green Lantern gag. The animation re-imagining THOR’s Asgard, as a palace with a Thanksgiving theme is priceless. And the Natalie Portman jokes are pretty funny too.

It’s weird, because it felt like the episode was setting us up for a two-parter like Trey Parker and Matt Stone usually do at the end of a season, but they managed to keep everything tidy and concise without stretching (and straining it) over multiple episodes.

After creating some great Christmas specials, it’s nice that SOUTH PARK is revisiting the Thanksgiving holiday for another skewering after Season 1’s classic “Starvin’ Marvin’”.

“A History Channel Thanksgiving” is a fast, fun and clever half hour and deserves to be right alongside A CHARLIE BROWN THANKSGIVING as one of the greatest Thanksgiving animated specials of all time.

Of course, the biggest difference is kids won’t get to stay up late to see this one.