Haphazard and not that funny even with the return of Lemmiwinks 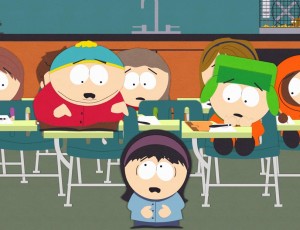 Getting bent out of shape because SOUTH PARK does an utterly tasteless episode is similar to being outraged that Lindsay Lohan did something stupid again to land her in jail.

They do that they do. It is what it is. We’re all the better for it.

In SOUTH PARK’s case, tasteless is their forte – and most of the time it works brilliantly. Where the big problems come from is when the show simply misses the mark in its tastelessness and doesn’t provide enough funny to back it up.

That’s the sad truth of “Bass to Mouth” which tackles so many topics, that it gives up trying to be funny and just resorts to a massive diarrhea attack on Mr. Mackey by episode’s end to wring some laughter out of a largely unfunny mess.

Oh, and the gerbil Lemmiwinks returns (he previously appeared in the 2002 Season 6 episode “The Death Camp of Tolerance”).

The episode begins when the school is obsessed with a new online gossip site that is taking every intimate detail of the student’s lives and putting it out there for public ridicule.

When one student accidentally craps their pants, the school faculty brings Cartman in and asks that he doesn’t turn this incident into a bigger situation than it already is – last year Cartman’s tormenting resulted in the suicide of another student.

The episode gets weirder from here when it’s discovered that the person getting these scoops is a gerbil named Wikileaks – the brother of Lemmiwinks.

The Frog Prince returns as well as a couple other spirits – and the episode gets progressively weirder throughout. The only real highlight is the battle between Wikileaks and Lemmiwinks for it’s sheer surrealness and absurdity.

Beyond that, this is one of those “let’s throw everything at the wall and hope something sticks” episodes. Cramming in student suicides (which isn’t funny, but it is SOUTH PARK, so why complain), gossip sites, pooping in your pants, self-righteous school faculty members and Selena Gomez doesn’t add up to a cohesive whole.

There is something about Lemmiwinks that is rather strange and bizarre, though the original use of the character was far funnier than the way it’s used here.

That said, it’s always interesting when SOUTH PARK tries something different and this episode desperately wants to be goofy and irreverent. I just wish it was a lot funnier. Yes, I laughed at the Mackey bit at the end, but it just felt so desperate after virtually no laughs during the rest of the show.

You can’t win them all and when you’re producing a complete animated episode in six days, some of them are bound to stink – unfortunately, it’s an episode with the return of Lemmiwinks which should have been hilarious.