Exclusive Interview: Julie Gardner and the Future of TORCHWOOD – Part 2

The producer responds to criticism of controversial sexual content 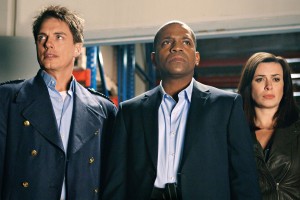 Julie Gardner one of the executive producers on TORCHWOOD, has always been a fan of its parent series DOCTOR WHO. So when she and Russell T Davies brought WHO back in 2005, it was a dream come true. The pair then went on to create the successful spins of THE SARAH JANE ADVENTURES and TORCHWOOD.

TORCHWOOD MIRACLE DAY has finished airing now, but our exclusive interview with Gardner continues as she tells ASSIGNMENT X a bit about the future of the series, and responds to criticism the series has gotten for portraying homosexual relationships.

ASSIGNMENT X: So at San Diego Comic Con John [Barrowman] was saying something that I wanted to check on.

AX: Actually I think both John and Eve [Myles] said that they would be up for coming back for another series.

GARDNER: Oh sweet God! They are a lethal combination. [Laughs] We love them. I love everything about TORCHWOOD, from the prep period where you are working on the stories and what you can offer the characters. I love shooting, because Eve and John are just a delight to be with. They are absolute pros and they have the best sense of humor. They are so invested in those characters and they do exceptional work. Then I love seeing it. If I wasn’t making TORCHWOOD I would absolutely be watching it. I don’t know if there will be more. Time will tell. The thing about there being more or not – you look at TORCHWOOD, and it’s always had such a labyrinthine history. For this new season, TORCHWOOD has been off the air for two years in the UK. The weird thing is there are some series where that would really matter. It would be a real problem. I think TORCHWOOD is so elastic in some ways and has had such a strange peculiar life. It was born out of DOCTOR WHO, and has been across so many different channels and so many international audiences, across so many different story structures, and so many numbers of episodes. There have been many number of different network executives across that whole span of years, and there’s no single way forward for the show. All options are possible.

AX: John also mentioned that Captain Jack might be coming across to DOCTOR WHO again. Does Steven Moffat talk to you and Russell T Davies about that sort of cross-over?

GARDNER: Everyone talks, absolutely. I love hearing from Steven because it’s always the most witty email or phone call. I don’t know how often Steven and Russell talk but yes they keep in touch of course. I don’t know if Captain Jack is going back into DOCTOR WHO. I have got no idea. I’ve never had that conversation with Steven; I don’t know if Russell has or not. Which isn’t to say that is or isn’t going to happen, I just don’t know.

AX: When I spoke to Russell at the launch for MIRACLE DAY, he said that he demands the WHO DVDs from Steven ahead of time. Do you get together and watch them?

GARDNER: There was a little bit of DVD rage, I can reveal. [Laughs] When I discovered that Russell was getting things in advance, I wanted to know where mine were. I went directly to the source. I didn’t go around to Russell’s house with Chinese take-away. I told Steven, “Hello! This is not a level playing field. I want my DVDs too!” [Laughs] He started giving me access to them in advance, but actually I stopped doing that because I love that BBC America pulled the transmission to the same night as the UK. So actually I’m part of what I loved about DOCTOR WHO as someone who worked on it and as a viewer, which is the sense of event; of sitting down at your set time with your tea or whatever like when I was a kid. So, I watch the BBC America transmission.

AX: When you were casting TORCHWOOD MIRACLE DAY did you purposely cast genre actors that you were fans of like Ernie Hudson, Nana Visitor, and John de Lancie?

GARDNER: No, the driving thought was always the best actor that was available and we would work with our casting team. Those were people we simply loved; of course we had watched the shows and movies they had been in. I won’t say that it was a deliberate thing, but it was a nice end result for us. It’s interesting, and I don’t know how controversial it is to say this, but when I work on TORCHWOOD, I never really think of it just as a sci-fi show. That was even true during the first two seasons. I don’t think I ever thought of going after actors that have a sci-fi pedigree, and particularly not with MIRACLE DAY and CHILDREN OF EARTH being so Earth-bound.

AX: Have you been surprised or did you expect some of the criticism that MIRACLE DAY has gotten for showing Jack engaging in homosexual acts?  The series is on STARZ which has never shied away from homosexual encounters on such series as SPARTACUS so what did you think to the negative criticism?

GARDNER: It’s interesting that episode seven got a lot of attention for the relationship between Jack and Angelo [his lover] in the UK. I’m kind of surprised only in as much as Jack’s relationships and his sexual history is absolutely true to the character as first established as far back as DOCTOR WHO. All the way through seasons of TORCHWOOD he’s a character that I would describe as honorable and romantic and true. He has a swagger to him which means he’s had heterosexual relationships and homosexual relationships and that’s part of who the character is. Look at the focus on the death of Ianto. I’m pretty sure people knew he was having a gay relationship with Jack on the show. It’s very clear. So I am surprised by the negative reaction.

In episode seven there is nothing explicit. The way the scenes were written, the way they were shot, there’s very little sex. Instead what you have is a very romantic and truthful relationship between two men. They are having a conversation about their life; about their fears and aspirations, and what New York means to them at that time. They just happen to be laying bed talking. So, it’s not really a scene about sex. It’s certainly not a controversial topic for me, because all I can answer you is I am absolutely certain in my heart and mind that the show we’ve made is true to the editorial and creative ambition that we set out in terms of storyline and character. I know we are true to the history of the show. That’s a primary goal. I also in the execution of those scenes we worked very, very hard and we work hard on everything to be sure that we are being appropriate to what we are showing and being fair. We treat the gay relationships exactly the same as we treat the straight relationships. In terms of what we see it is appropriate for the timeslot that the show is going to transmit in. We are really thoughtful about that.

AX: Moving into a broad spectrum. Are you developing TV series with several different networks?

GARDNER: Yes. We work across the board. We have a number of developments with cable broadcasters ranging from HBO to STARZ to FX, and we have a small number of pieces for network. There’s been some coverage of DAVINCI’S DEMONS for STARZ, and that is a show I am currently developing. David Goyer has created that and he’s a really great writer. We’re a long way into development on that. It’s not formally greenlit yet but that’s a show that I would hope to work on and be able to watch.

AX: Russell is working on a new series through Showtime. Is that through you or do you no longer own him?

GARDNER: Yes that is through us. Oh if only I owned him! [Laughs] Russell is free as a bird in his heart, but I love working with him.