The X List: Five Best DOCTOR WHO Stories About the TARDIS

The X List: Five Best DOCTOR WHO Stories About the TARDIS

We give you a few more glimpses inside that sexy thing

She’s the most consistent star in the history of the series, appearing alongside her beloved Doctor even when dozens of other companions have come and gone. She’s the blue box with the infinite universe of rooms and corridors within, the last child of Gallifrey, the dimensionally transcendental Type 40 time-and-space machine known as the TARDIS – and she’s sexy too.

From the SIDRATS of “The War Games” to the solo flying of the console in “Inferno” and “Day of the Daleks;” from glimpses of control rooms and wardrobes in “The Masque of Mandragora,” “The Twin Dilemma,” “Time and the Rani,” and “The Christmas Invasion;” and from its near/total destruction in “The Mind Robber,” “Frontios,” and “Last of the Time Lords,” we’ve seen the TARDIS go through many changes over the years. Even the police box has given way to a cathedral organ and ornate gates when the chameleon circuit temporarily went awry in “Attack of the Cybermen!”

The TARDIS has been a fixture of DOCTOR WHO since its very beginning, but although a great deal of mythology about its nature and workings has built up over nearly half a century of storytelling, there aren’t many episodes specifically about the TARDIS or based within her exterior walls. With the recent airing of Neil Gaiman’s “The Doctor’s Wife,” it’s a good time to give everyone a quick primer in some of the classic WHO stories that significantly added to our understanding of the TARDIS and gave us a look at a lot of additional corridors and rooms. It’s just the coolest ship in science fiction history, so here are the five best TARDIS tales you can’t miss (and when I say “best,” let’s assume “The Doctor’s Wife” is already beyond the top of the list!): 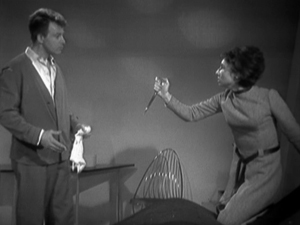 Long before the Cloister Bell, the TARDIS had to resort to much harsher measures to warn the crew of danger. The First Doctor (William Hartnell), Ian (William Russell), Barbara (Jacqueline Hill) and Susan (Carole Ann Ford) are buffeted by strange sensations, and Susan does a Rory on Ian at one point by apparently going mad and threatening to attack him with scissors! It’s just the TARDIS’ way of saying “please fix the Fast Return Switch, kthanxbai.” 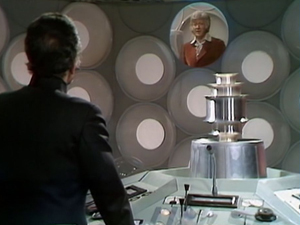 In “Time/Space,” this year’s Comic Relief DOCTOR WHO two-part mini-adventure, the TARDIS crew had to deal with a Moebius loop situation in which the police box materialized inside the console room. But that’s not nearly as bad as the time when the Doctor (Jon Pertwee) and the Master (Roger Delgado) wind up intertwining their TARDISes (that’s right, not Tardii, what are you smoking) and threatening each other with a “Time Ram!” No, it’s not a euphemism. 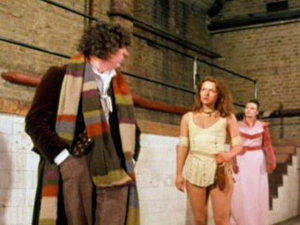 The Doctor (Tom Baker) returns to Gallifrey to foil (heh) a two-pronged invasion by the Vardans and Sontarans. Part of his strategy involves leading a Sontaran detachment deep into the TARDIS, which for this adventure alone suddenly looks, as Gaiman himself has put it, like “an old-fashioned brick Victorian hospital.” Time to change the desktop theme, Doctor. 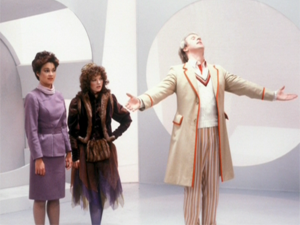 In one of the most elaborate explorations of the TARDIS in classic WHO history, these last two parts in a trilogy that began with “The Keeper of Traken” establish a new Master (Anthony Ainley), bid farewell to the Fourth Doctor (Tom Baker) while saying hello to a Fifth (Peter Davison), and introduce us to all-new chambers in the ship like the ivy-laden Cloister Room, a room filled with cricket memorabilia, and the pinkish-gray tranquility of the Zero Room. “I suppose this is the mean free path tracker!” 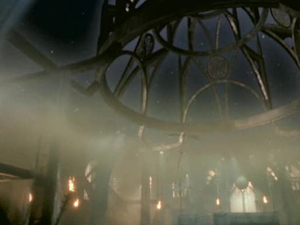 As the Eighth Doctor (Paul McGann) battles the Master (Eric Roberts) on New Year’s Eve 1999, the stunningly beautiful gothic interior of the TARDIS, unique to this movie, takes center stage with an admittedly nonsensical plot that involves opening the Eye of Harmony and setting the ship to temporal orbit and then…no wait, the (very different and far larger) Cloister Room has to…never mind, she looks great with all those buttresses and bats and a skylight view to die for.