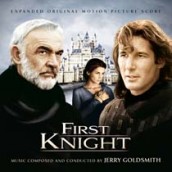 King Arthur gets his full due from Jerry Goldsmith

By 1995, Jerry Goldsmith was nearing the winter of his years, age which meant nothing when it came to the youthful passion he’d invest in his work for almost another decade. Yet it was precisely Goldsmith’s mature, melodic energy that made this king of Hollywood composers a natural to sit on the throne alongside Sean Connery in FIRST KNIGHT, a sweeping re-telling of the Arthurian legend that deserved a more noble reception. Now the regal, resounding brass is here to announce a two-CD set of Goldsmith’s complete score, the magnificence of his accomplishment soaring with symphonic heroism worthy of the greatest (if wished-for) ruler of all time.

Given the vast range of musical subjects that Goldsmith had tackled in the previous decades (among them both World Wars, the inside of Martin Short and a planet of the apes), it’s a wonder that his only score set in the knightly era had been 1987’s LIONHEART– a score that many fans regard as being among his best. If admirers didn’t already have that opinion about FIRST KNIGHT, they will now.

Driven by a trumpeting theme that’s all about the best and boldest in mythic men, Goldsmith’s fully orchestral score is a wealth of regal melodies that capture the longed-for romance of Camelot, especially the impossible, lush attraction between the realm’s most beautiful queen and its bravest knight, all while the proud music of Arthur casts a blind eye. But most of all, FIRST KNIGHT rules with some of Goldsmith’s most smashing action writing, from the heroic thrills of “Escape from the Cave” to the noble brass percussion of “Night Battle,” a cue where the feeling of hundreds of thundering hooves and clanging suits of armor sing through one’s dreams of military honor.

And for a composer who won an Oscar for the evil Latin chanting of THE OMEN, Goldsmith makes godly amends with the glorious, fighting verses of “Arthur’s Farewell,” a Carmina Burana-worthy mini-opera that sends Connery to become the stuff of legend, while giving Ben Cross’ glowering villain his just deserts. As “Camelot Lives” goes proudly marching off to an eternity of retellings, you feel the honor, and duty of Goldsmith to do justice with the greatest “general” of all time, a task he earns another golden crown for here.

Originally released with just 40 minutes of score on Epic Soundtrax, La La Land’s new KNIGHT barely contains Goldsmith’s masterwork on one 78 minute disc, while allotting the second to the original album. Then it’s a near half hour of notable alternates, the most impressive of which has Goldsmith engage in some outright Korngold-isms for “The Ambush / First Sight,” the kind of soaring, heroic trumpet fun that makes you wish Goldsmith got the chance to score another English legend named Robin Hood.

While he’d return once more to the breach with the unused (but available) score to TIMELINE, FIRST KNIGHT arguably stands as the score to rule them all in his kingly genre, not to mention one of the best soundtracks Arthur, Lancelot and Guinevere ever received, with Goldsmith’s own legend here once again regaled in Jeff Bond’s terrific liner notes.