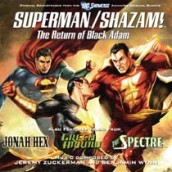 Forget The Wonder Twins and that stupid blue monkey. DC Comics’ animation certainly isn’t kids’ stuff anymore, especially given the musical sophistication that’s put into this direct-to-video DC Showcase edition (half of whose four chapters would gleefully get a reject stamp by The Comics Code Authority).

Tying the disparate sounds of its stories together are Jeremy Zuckerman and Benjamin Wynn, whose musical wonder powers ignite under the emblem of Track Team. Getting the muscle of a real orchestra through samples, and above all good writing, Zuckerman and Wynn bring superhero majesty, and mythic enchantment to the Showcase’s best entry that highlights the origin of The Big Red Cheese.

The Green Arrow’s arsenal is graced with rapid-fire percussion and just a dash of nobility, while the ornery Jonah Hex does his bounty hunting to a mean-ass western guitar and a clever bolero, all while resisting the dark melodic allure of a whoremistress, but it’s the least-known hero in the lot who actually gets the best score with The Spectre. Starting out with near-porno jazz cheese, Zuckerman and Wynn employ some of the coolest recreations yet of the ’80’s genre sound that would be a happy bedfellow with the twisted synths of John Carpenter and Alan Howarth’s, HALLOWEEN II, let alone Jay Chattaway’s MANIAC.

Yet even this approach doesn’t seem like a Marvel comic that’s been mistakenly stuck in the musical stack, ensuring the Track Team a membership in a DC toon scoring Justice League that includes such other noteworthy composers as Robert J. Kral (GREEN LANTERN: FIRST FLIGHT) and Chrstopher Drake (WONDER WOMAN). It’s a cool enough style that I’d almost wish for a new take on Gleek just to see how they’d play that obnoxious caped primate.