Yo ho ho! We take you on the high seas, TARDIS style!

Although “The Curse of the Black Spot” was only the second full-fledged period pirate tale featured in DOCTOR WHO, there have been  other televised adventures in which the TARDIS has landed in the middle of swashbuckling, sea- or space-faring scurvy dogs in full eye-patch and parrot-y regalia.

Let’s take a look back at the other times the Doctor and companions shivered their timbers! (Note to the dedicated fans: I’ve automatically discounted Blackbeard’s brief appearance in “The Mind Robber” because it’s not a major part of the story, and we’re only doing actual TV WHO, not the novels, audios or what-have-you.) 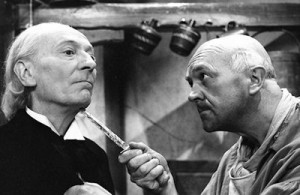 The First Doctor (William Hartnell), Ben (Michael Craze) and Polly (Anneke Wills) drop into a treasure hunt as Captain Pike (Michael Godfrey, not Jeffrey Hunter) of the Black Albatross seeks the lost gold of his former commander, Avery. Wait a minute…Avery? That’s right, new WHO fans, if you want you can pretty much consider “The Curse of the Black Spot” a prequel, but if you don’t want to, you can ignore it too. 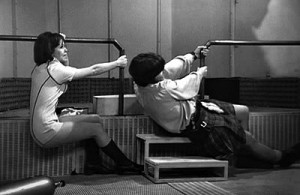 In the Second Doctor’s (Patrick Troughton) penultimate adventure, and sadly one that is nearly completely missing from the BBC archives, the TARDIS crew helps to defend beacons and bases from marauding, well, space pirates. Could these be the descendants or colleagues of Avery’s team post-“Curse?” That’s for the fan forums to debate. 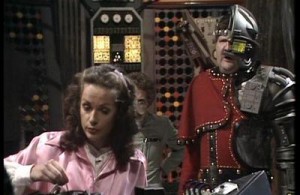 While seeking one of the six parts of the fabled Key to Time, the Fourth Doctor (Tom Baker) and Romana (Mary Tamm) have to face down the laughable Captain (Bruce Purchase) and his robot parrot as well as the decrepit but still dangerous Queen Xanxia. Andrew Robertson’s toadying Mr. Fibuli seems to have taken acting lessons from Arte Johnson. 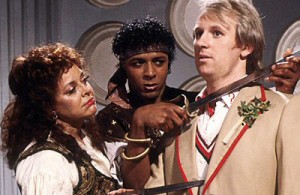 Long before Captain Avery set off into space, another human pirate crew led by Eternal Captain Wrack sailed an actual pirate ship, the Buccaneer, through the stars as part of a cosmic race. The prize is Enlightenment itself, and The Fifth Doctor (Peter Davison) has to trust that shifty companion and Black Guardian (Valentine Dyall) disciple Turlough (Mark Strickson) will make the right choice when the time comes. 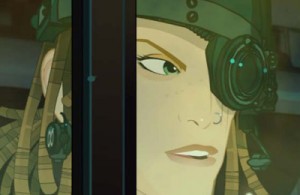 In the new show’s first animated miniseries produced as a special extra adventure, the Tenth Doctor (David Tennant) and Martha Jones (Freema Agyeman) must stop the evil Baltazar (Anthony Head) from getting his hands on an ancient craft called The Infinite. Along the way they have to deal with pirate Captain Kaliko (Liza Tarbuck) who sports a datachip earring and an eye-patch she might have borrowed from Bruce Purchase’s Captain. “Mr. Fibuli!”