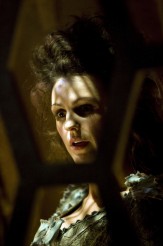 Summarizing this one just seems so useless since it encompasses ideas so much grander than any paragraph could contain, but here we go. DOCTOR WHO Series 6 makes a successful grab for greatness with “The Doctor’s Wife,” a love letter to the show penned by none other than celebrated fantasist Neil Gaiman.

The Doctor (Matt Smith), Amy (Karen Gillan) and Rory (Arthur Darvill) respond to a Time Lord distress signal from outside the universe and discover a sentient asteroid named House (Michael Sheen) eager to consume the TARDIS. When the Doctor’s most faithful companion (Suranne Jones) finds herself trapped in a dying humanoid body, she must team up with her beloved Doctor to escape the evil House while Amy and Rory run through a TARDIS interior gone mad.

Where to begin? Simply typing a sentence like “an episode of DOCTOR WHO written by Neil Gaiman” is mind-blowing, but that the episode in question turns out to be a profound statement on the love story at the heart of the entire series is magical and moving beyond belief. So many fan theories about regeneration, the Doctor’s relationship with his TARDIS, and the ship’s true nature are now canon with a single sweep of Gaiman’s pen (or keyboard), and the poetic inversion of the show’s basic premise with the revelation that the TARDIS believes she stole a Time Lord and ran away to see the universe. Well, it can surely bring a tear to the eye of the most stoic fan. And I’m not very stoic.

The idea that the TARDIS is a living, sentient being has been a part of WHO lore since the very first episode. No, really, when Ian (William Russell) first touches the police box in 1963’s “An Unearthly Child,” he exclaims “it’s alive!” Granted, this is the reaction of an uninformed human, but as the years went on, the show flirted again and again with the notion. During the Third Doctor’s (Jon Pertwee) era, the Doctor frequently referred to “her” as alive – he even flew the console alone during that time too – and most recently the new series has firmly established the organic nature of the TARDIS by stating that they are grown. Idris (Jones) isn’t even the first woman to house the TARDIS’ “soul;” that would be Rose (Billie Piper) in Series 1’s “The Parting of the Ways,” in which the TARDIS expressed her desire to keep “my Doctor” safe. We know what you mean, old girl.

This review could simply consist of a list of all these kisses to the past, like the references to “The Edge of Destruction” (the TARDIS interior turned into a haunted house endangering its occupants), “The War Games” (the Time Lord telepathic distress signal boxes), the E-Space trilogy and “Logopolis” among others (taking the TARDIS outside the universe), “Castrovalva” (deleting TARDIS rooms for thrust), “The Five Doctors” and others (the Eye of Orion), and so on. Oh well, I made a list anyway. And besides “The Parting of the Ways,” the Russell T. Davies era is referenced by the amazing inclusion of that era’s console room and the return of a familiar monster. Even though the presence of the Ood was dictated more by budgetary concerns than pure creative choice, it works very well, providing a more recent continuity homage – including the Doctor’s regretful comment that this is another Ood he’s “failed to save” – with a creature already well known as being susceptible to mind control.

Gaiman’s work is often labeled “dark fantasy,” and this episode has more than its share of darkness in the fates of hundreds of Time Lords, the ways in which House toys with Amy and Rory, and even the physical condition of Auntie (Elizabeth Berrington) and Uncle (Adrian Schiller). That’s right, I forgot to mention “The Brain of Morbius.” Never mind. In terms of design, the production team also live up to that label by providing stunning costumes and sets out of some Burton-esque sci-fi fairy tale as well as a Giger-inspired wreck-strewn landscape. The ‘80s-style console and partial control room set (complete with vintage sound effects) is also sweetly nostalgic and yet perfectly in keeping with the circumstances of the story.

The whole notion of the TARDIS becoming a living humanoid woman would fail miserably if the casting wasn’t up to it, but that’s not remotely a problem. Suranne Jones is brilliant as the embodiment of the show’s longest-running central character, and strangely believable as the soul of a machine that discovers the joy of life and sharing time with the man she loves.

This may be Matt Smith’s most brilliant performance to date. He somehow manages to be a lost little boy and a lonely old man at the same time, and it’s beautiful and heart-breaking to watch. Gillan and Darvill are also fantastic, with Gillan once more helping to underscore what a far better person Amy is now – I just love what Amy visualizes for the concept of “delight” – while Darvill not only shows Rory’s great sensitivity but his growing aptitude for heroic strategizing. He even gets to play a creepy old Rory created by House that easily terrifies Amy and us too. And as Auntie and Uncle, Berrington and Schiller craft surprisingly endearing characters in such short screen time, making their sudden deaths all the more jarring.

There are tons of dialogue gems, from Idris’ description of biting to the revelation of the first thing the Doctor ever said to the TARDIS. Smith even gets to dabble in his previous incarnation’s penchant for lamenting the Time War. And in addition to all the concepts that Gaiman canonizes here from decades of fan discourse, he has thrown into the mix several new ideas that will spark plenty of discussion in the future. In a few lines, he’s done everything from establish a reason why no one should fear deleting rooms in the TARDIS, tacked on a few crucial facts about the day the Doctor stole that Type 40, cheekily reinvigorated two classic-era clichés about running through identical corridors and shooting on location in quarries, and even introduced us (posthumously) to a new Time Lord. Entire libraries of fanfic have been created with Gaiman’s introduction of The Doctor’s old friend the Corsair, “one of the good ones” we’ve never heard of before.

As far as the series in its current form, the episode has a hint of things to come with a cryptic comment about River, and it also continues a thread concerning the Doctor’s darker morality. Recently some viewers reacted variably to the Doctor’s willingness to turn the entire human race into genocidal crusaders against the Silence. But as we’ve seen time and again, while the Doctor often pays lip service to peace he has no compunctions about using violence when it’s warranted. In this episode, the vindictive crushing of House’s consciousness by the tag-team of the TARDIS and the Doctor is pretty brutal but when you cross these two, you get what you deserve.

All of this feels superficial when trying to capture what makes this episode so special. In the end, it’s an episode entirely about how much the Doctor and the TARDIS love each other, and by extension how much Gaiman and we all love DOCTOR WHO. Someone even told me they felt that if the show ever was to end – truly, finally end – this would have been a perfect final story. While it sends the cast off on another adventure as if things will happily continue, it brings everything full circle to another junkyard like the one on long-ago Totter’s Lane and provides emotional closure as the Doctor finally gets to meet his one true love. I wouldn’t want the show to end, ever, but I have to admit, it’s a sweet idea.

So yes, “The Doctor’s Wife” is an instant classic, a possible winner of next year’s Hugo Award for Best Dramatic Presentation (Short Form), and it has a permanent and incalculable impact on the show’s mythos. But while we let that sink in, it’s time for the TARDIS to once more take us where we need to go, and apparently it’s a place where they have vats of programmable flesh for manufacturing clones. No potato-heads though, these are pasty white with big mouths. Oh DOCTOR WHO…you sexy thing.