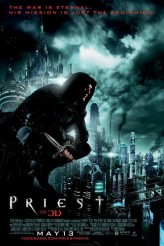 PRIEST is a decent enough post-apocalyptic action movie, pitting a kinetic superhero against an army of darkness, but the film’s reliance on archetypes is at odds with what seem to be its intended philosophical underpinnings. By the end, we can’t tell if director Scott Stewart and screenwriter Cory Goodman have intentionally managed to avoid being overly pretentious in adapting Min-Woo Hyung’s graphic novels, or if they just didn’t flesh out the concept enough for that to be a danger.

We are told there has been a terrible war fought between humanity – led by the Church – and vampires. Humans won, and vampires are now exiled to prison-like reservations far out in the desert, while most of human civilization now dwells within dark metal totalitarian cities. A man who is only known as Priest (Paul Bettany) has been loyal to the Church, even though he’s been largely discarded since his days as a fighting force. However, when his brother (Stephen Moyer) is attacked and the brother’s daughter Lucy (Lily Collins) is kidnapped by vampires out in the badlands, the Priest goes rogue in an attempt to rescue his missing family member and find out what has happened.

We see the vampires seem to be led by Black Hat (Karl Urban), who more or less matches what we think of vampires – he’s humanlike, with fangs, special abilities and a thirst for blood. All the other vampires are eyeless, toothy blobs that move with incredible speed. Having vampires potentially evolve from the blobs into something we’re already familiar with takes a bit of the kick out of the premise, and director Stewart doesn’t really go for jump scares, so while PRIEST is gruesome, it is virtually never scary.

Since the priests are people who were all born with special physical talents, the movie is big on fight sequences. The use of weaponry is creative and intriguing, and the slo-mo lets us see who is going where, even if it doesn’t add much these days (it was brilliant in THE MATRIX, but nothing new is added here).

There are certainly intriguing underpinnings in the matters of faith as opposed to organized religion as opposed to/in conjunction with theocracy, but because we only see the government briefly, as stock villains, there’s a sense that a lot of nuance is being lost. The overkill score by Christopher Young insists on profundity where some other mood might be more effective.

Bettany is wonderfully world-weary and capable (and sounds like he’s doing Timothy Olyphant’s JUSTIFIED accent) and Maggie Q is a lovely tragic action heroine as a female priest. Christopher Plummer, Brad Dourif and Stephen Moyer are all used briefly to good effect.

PRIEST is decent for what it is, and what it is may suffice, depending on the viewer’s tastes. It’s just that there isn’t anything here that is nurtured enough to resonate either emotionally or mythologically once the film is over.

Click on Link for PAUL BETTANY interview on PRIEST