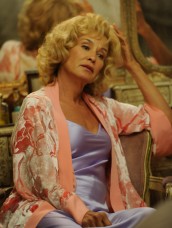 AMERICAN HORROR STORY shows that it can sustain the tone of its original episode, expanding its mythology while delivering an episode that has closed-ended aspects. “Home Invasion” takes a cue from FUNNY GAMES/THE STRANGERS, turning those films on their heads as a trio of profoundly annoying young thrill-killers make the enormous mistake of trying to re-enact some famous murders in the Harmon house.

A prologue set in 1968 introduces us to Maria and her nurse Gladys, who are unfortunately at home when pretend-accident victim Franklin comes calling.Franklin tortures and murders both women in what will become the Harmon house in the present.

Vivien (Connie Britton) worries that something is wrong with the child she is carrying. Husband Ben (Dylan McDermott) reassures her that everything is fine and that the baby will save their marriage. Ben (Dylan McDermott) is very unhappy when teen patient Tate (Evan Peters) talks about having sexual fantasies involving Ben and Vivien’s daughter Violet (Taissa Farmiga). Ben tells Tate’s mother that he wants to send Tate to a different psychiatrist. Ben also treats a young woman (Azura Skye) who tells of a recurring nightmare about being cut in half by an elevator door and who prowls around the house after her session.

Then Ben’s young ex-mistress calls from Boston to tell him she is pregnant. Ben lies to Vivien, telling her he has to tend to a suicidal ex-patient, and heads east. While he’s away, Ben’s odd new patient shows back up with two friends, one male and one female, all intent on recreating Franklin’s murders with Vivien and Violet. Mother and daughter are hardly passive, but they are saved partly by the unexpected appearance of Tate, who advises Violet to lure her tormentors to the basement.

As viewers of the first episode know, the basement has a way of permanently taking care of unwanted visitors. Tate, unseen by Violet or Vivien, also attacks the fake patient with an axe, virtually making her dream come true by practically cutting her in half. She leaves a trail of blood on her way out of the house and collapses on the sidewalk. Ben has accompanied his mistress to a Boston-area hospital to wait while she has an abortion, but leaves the waiting room when he learns about the attempted murders (that is, he learns what Vivien and the police know about it). The ex-patient’s two cohorts have apparently disappeared. In fact, they are dead in the basement, where Tate, the household maid (Frances Conroy) and neighbor Constance (Jessica Lange) gather to secretly dispose of the bodies. Vivien decides she wants the family to sell the house and leave.

This kind of intuitive good sense is one reason we like Vivien more and more. Another reason is her ability to be cool in the face of mortal threats. Even without knowing Tate is there, Vivien continually fights for her survival, never giving in to what would be understandable terror. Like the villains in THE STRANGERS and FUNNY GAMES, the smug, post-modern invaders in “Home Invasion” are so maddening that we want to see them get flattened the moment we meet them – we’re really on the side of the house in this instance. More deserving victims of what the house does would be hard to find. This is the guilty pleasure side of horror: seeing monsters get vanquished, even when we know the conqueror is a still bigger monster. (At least the house isn’t unbearably hipper-than-thou.)

There are all kinds of new mysteries introduced here. What is Tate’s connection to the house? Why is Constance trying to make Violet painfully ill via tainted cupcakes (which get snarfed by one of the attackers)? Just what the heck has made that basement such a malevolent, fatal place? AMERICAN HORROR STORY doesn’t seem like it’s being coy, just making these intriguing matters that bear further examination.

As far as the character dynamics go, Ben continues to be flawed and slightly pompous, while Vivien and Violet’s resilience makes them ever more sympathetic.

“Home Invasion” is both good episodic television and good horror – indeed, it is superior to a lot of the films that it echoes.