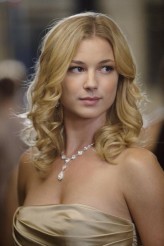 Emily gets a much-needed reality check. 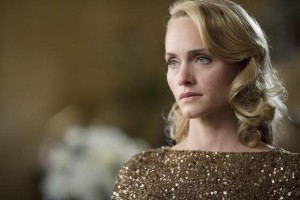 One of the problems I’ve had with REVENGE  is that it does stretch credibility that Emily Thorne (the former Amanda Clarke) seems to think that she is going to ruin the lives of all the people involved in the false accusation and conviction of her father David (James Tupper) without getting caught.

But tonight, Emily (Emily Van Camp) does come close and it’s just clever enough that I’m almost willing to forgive that the episode is told in flashback after the falling death of the evil Lydia (Amber Valletta), former best friend of Emily’s nemesis Victoria Grayson (Madeleine Stowe) and current mistress of Victoria’s husband and partner in nefarious dealings, Conrad Grayson (Henry Czerny). Flashback is rarely justified and usually comes off as a cheap trick to make us think the episode is more exciting than it is. In this case, it was utterly pointless.

The episode is mostly based on the fall out of last week’s take down of the shrink that condemned Amanda to never seeing her dad again. Victoria is obsessed with trying to make things up to her daughter Charlotte (Christa B. Allen). And Lydia, in trying to make things up to Victoria, accidentally stumbles onto a clue suggesting that Emily may, in fact, be behind all the awful things that keep happening. So, naturally, Emily finds a way to incriminate Lydia.

Better yet, Emily and Victoria’s wayward son Daniel (Josh Bowman) seem to be back on track – Daniel finds out that his so-called buddy Tyler (Ashton Holmes) was the one who messed up Daniel’s big date with Emily last week. Frankly, I think Daniel forgave Tyler just a little too readily, but I’ll go with it. Still not sure how Emily really feels about Daniel, beyond him being part of her plan for revenge, but I suspect that has a lot to do with Van Camp’s general flatness overall. That, and the fact that Victoria is turning out to be far more conflicted about her role in David Clarke’s undoing makes her a far more interesting character.

You’re not going to be watching this show because you need a serious dose of reality. The idea is to check logic at the door and enjoy the roller coaster ride – and you certainly have one tonight.