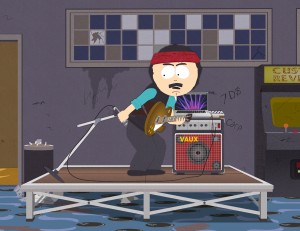 Was it me or were Trey Parker and Matt Stone talking directly to all the fans who have complained what an uneven season of SOUTH PARK it’s been with the mid-season finale “You’re Getting Older.”

Or maybe Parker and Stone were expressing their own frustration with doing the same shtick week after week for fifteen seasons? They have a Broadway hit now with BOOK OF MORMON – who needs SOUTH PARK? Well, the fans do, for better and for worse and were rewarded handsomely with this episode.

The boys are notorious for addressing things very quickly, and this whole episode which dealt with generational shifts in taste and things that you once thought were cool, are now “s***”  just hit a little close to home.

The episode begins with Stan’s 10th birthday party and his mom Sharon taking away a gift he got – a CD of a new kind of music called Tween Wave. He was bummed out that his mom hated the CD which she says sounded like s*** but then Stan’s dad Randy starts to defend his choice to listen to that music – and that he doesn’t want to be one of these parents who hates the stuff their kid’s love.

Well, when he puts the CD in, the music sounds like someone actually going to the bathroom with a little bit of a techno beat. Undeterred, Randy claims he likes the music and decides to start his own Tween Wave band – “Steamy Ray Vaughan” eventually adding a special guest – Steamy Nicks. The end result is two people on stage literally relieving themselves to a techno beat.

The big problem though is Stan. When he starts to listen to Tween Wave after his 10th birthday, he starts to realize it’s crap too. When he goes to the doctor, he discovers that his brain has been rewired. Not only does he think childhood things are crap, but everything else is too. There’s a clinical word for it, he’s become a “cynical ***hole.” Now, even his friends don’t want to hang out with him because he’s such a bummer and, THE HORROR, Kyle and Cartman are actually becoming close friends.

When Randy and Sharon realize they’re tired of going through the motions and doing the same things over and over again – they end up divorcing (or separating, it’s unclear), and the episode ends with Stan moving out of his house and losing his friends – with the actual Stevie Nicks song “Landslide” playing in the background.

Now this is what I call a bummer, but it’s also heartbreaking, and surprisingly real for a show that likes to push all of the comedy buttons.

Still, “You’re Getting Older” proves to be one of the best episodes of Season 15 yet, because it’s a giant f-you by Parker and Stone. The last episode of mid-season usually ends up being a little different or experimental, and this one definitely lives up to that legacy.

It’s also absolutely hilarious. The idea that everything Stan sees is literally poop and that nothing is funny anymore is classic SOUTH PARK. And the dark detour it takes by the end of the episode, only makes you hope that when the series returns in the fall, that this episode doesn’t just restart from scratch all over again (like it’s hinted at during Stan and Sharon’s conversation). And yes, it will be returning in the fall. There’s seven more episodes to Season 15, like every year, so those that are thinking Stone and Parker are through are seriously mistaken.

There are some great sight gags throughout – particularly when Stan sees people talking and s*** literally comes out of their mouth. And when Stan goes to see a movie, there are previews for new Adam Sandler and Jim Carrey movies – and the pay-offs to both are very funny (made even more funny by the fact that these are ACTUAL movies they’re parodying).

I also liked how the  parents were trying to educate their kids on the music they grew up with – such as “Every Breath You Take” by the Police and when the kids hear it, they think it sounds like crap too.

“You’re Getting Old” touches upon some pretty interesting themes of what’s funny. One person’s crap is another person’s gold. The end result is a sharp, wickedly funny and somewhat tragic episode that takes SOUTH PARK into a daring new direction which is exactly what we expect them to do (especially after fans and reviewers like us have complained the show has not been up to its usual standards). Well, they sure showed us old “cynical ***holes.”

UPDATE – Click on link for: Trey Parker reveals that SOUTH PARK is not ending (6-18-11)