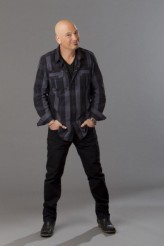 Snow abounds AGT as the show looks for talent in Minneapolis.

At first it seems like another joke Howie Mandel is playing on Piers Morgan. AMERICA’S GOT TALENT is about to start and there is no Morgan anywhere. Maybe Mandel has locked him in his dressing room? Or perhaps he gave him the wrong directions to the theater. Nope, none of that, but wouldn’t that have been hilarious? Well, not to Morgan I suppose, instead the truth is because of bad weather Morgan’s flight was delayed from New York and he wasn’t able to make the start of the show.

As the saying goes, the show must go on…and it did for awhile with just two judges – Mandel and Sharon Osbourne. So, because of Morgan’s absence everything Morgan always feared came true. Mandel and Osbourne were sending act after act to Vegas, even some very bizarre ones like a little person dancer/performer who does a part striptease. Morgan would never had allowed that to go through without some fierce comments.

One after the other…a talking parrot – again – gets two yes’s, as does a drag guitar player, a bottle playing band and a campy magic show. None all too great but sure to light a fire in Morgan’s belly. It’s obvious early on that Mandel is actually sending through acts just to irk a non-present Morgan after the fact. It seems to work as Morgan sits in his chauffeur driven car hurriedly approaching the theater. He knows this is what Mandel is doing without even actually seeing it happen.

Right before Morgan’s arrival a beautiful opera singer whose fiancé was killed in an automobile accident sings a stunning and haunting “Ava Maria” and gets a trip to Vegas easily. Then the mood changes and in walks Morgan. Within seconds of his first performance seen, as if a play for some retribution, he buzzes Those Funny Little People variety act who were really charming and humorous with their big heads and goofy demeanor. Morgan was out to gain back some civility to the show but it didn’t work. Osbourne and Mandel put the Funny Little People through. And in a hilarious side, Mandel brought the group to Morgan’s dressing room, opened the door and told them to go on in and get a drink with Morgan brooding inside begging them to please vacate his dressing room immediately. Now that’s entertainment!

The best act by far and to date is the Silhouettes, dancers who performed behind a screen an incredible and beautiful dance act. Finally, something unique! They are the act to be reckoned with come Vegas. Stay tuned.