A great idea, topical, some laughs and Cartman goes crazy

One of the best reasons for Trey Parker, Matt Stone and the entire production team at SOUTH PARK to put themselves through hell to deliver brand new animated episodes in six days is the ability for them to be topical.

That means that whatever is current or in the news, can be instant fodder just like SATURDAY NIGHT LIVE, THE DAILY SHOW, THE COLBERT REPORT and others of its ilk. 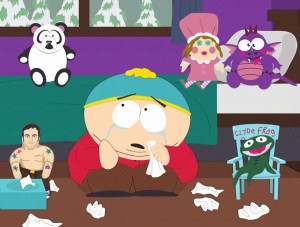 Yet, this is also animation – and very complex to pull off, especially if they don’t get it right content-wise (which they sometimes don’t). That’s the tightrope act they play though, and as a SOUTH PARK fan (through the best and worst of it), that’s why I keep coming back every season week after week.

With “1 Percent”, the boys tackle the current economic climate and the various “Occupy …” gatherings that have taken America by storm.

True to form though – they put their own spin on it and as always, don’t draw a line in the sand and take sides either. They rib on conservatives AND liberals AND fat people. Hey, it’s SOUTH PARK.

The episode starts off with the elementary school failing their Presidential Fitness Test. While the school on whole passed, one percent – that one percent – failed so miserably over anyone else, it brought the average down and made South Park the worst school in the country.

Everyone knows it’s Cartman who screwed everyone over – and is now forcing everyone into more mandatory fitness classes for four additional weeks, so Cartman plays the martyr again and cries about how the 99 percent is ganging up on the 1 percent.

With his only friends his stuffed animals, Cartman tries to handle being on the outside of things with his usual blinders on – but when his stuffed animals start mysteriously dying, he suspects foul play (and vengeance from his school mates).

Meanwhile, two South Park kids decide to occupy the lawn in protest outside Red Robin and it turns into a huge nuisance when more police and security show up to contain this “Occupy Red Robin” protest.

“1 Percent” takes the ridiculous nature of the media’s coverage of these Occupy protests plus the wayward nature of them and bundles it into a neat SOUTH PARK package. It’s great satire, with some very pointed jabs that hit home what many people have been thinking, but are too afraid to say it out loud.

The horror movie flourishes involving Cartman and his stuffed animals are pretty great. The animation team does a phenomenal job of bringing these moments to life – particularly toward the end when the killer is revealed. This may have only been done in a week, but the animators have really brought some flair and panache to these Cartman moments.

The only downside to “1 Percent” is that it’s not as funny as it probably could have been. It’s still a good episode, but it’s one of these SOUTH PARK episodes that takes a political stance which brings a more absurd humor to the mix this week instead of it’s more over-the-top laugh out loud comedy. It’s a different balance, but it still works well for me.