Sadly, another largely unfunny offering with a should have been hilarious concept at its core 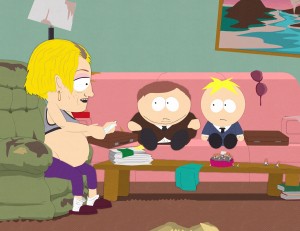 I’m starting to feel really guilty for ripping into SOUTH PARK so much. So far, Season 15 has been wildly uneven and after last week’s comeback episode “T.M.I.”, this week’s “Crack Baby Athletic Association” sends the show right back into the crapper again.

After a brilliantly funny opening gag parodying those incredibly depressing Sarah McLachlan animal shelter commercials (substitute crack babies for animals), the episode never really comes together and then ends up becoming more about Slash as a surrogate Santa (more on that later).

When those crack baby commercials start appearing in between an episode of Terrence and Phillip, Kyle feels guilty and heads down to the hospital to volunteer and play with some of the crack babies. When he arrives though, he sees Cartman leaving.

Realizing Cartman is up to something, he discovers that Cartman has a new business/scam. He’s filming crack babies playing crack baby basketball (essentially two crack babies fighting over a small piece of crack). Cartman is making money off these videos on the internet and he needs a Jewish accountant. Kyle, surprisingly gets suckered into this scam and slowly finds his soul stripped away as Cartman’s influence sends him into denial about his wrong-headed involvement in this.

Meanwhile, Cartman demands that his lackeys find Slash (of Guns ‘N’ Roses) who seems to be everywhere lately – Slash even performed at his birthday party. What they discover though is that Slash is fictitious person and the reason he seems to be everywhere at once is because one of their parents dresses up as him.

It’s a total Santa parable that would have seemed funny in the 1980s at the height of G’N’R fame, but the joke just isn’t that funny. It ends up being a gag that goes on too long and detracts from what should have been a the funnier A story of the crack babies.

The idea of crack baby basketball is funny, but the pay-off, two babies pushing a piece of crack around, isn’t as funny as what you can conjure up in your head.

There’s also a couple of funny jabs at Denny’s for their recent bacon celebration items – aka Baconalia.

Random lines of dialogue and potentially funny ideas though, don’t make up for the episode not being cohesive and consistently funny throughout. This feels like to two half-written episodes that didn’t quite blend together. I almost wanted the crack baby basketball to slowly accelerate into something more outlandish and ridiculous. The pay-off of Cartman and his business getting screwed by EA Games, the same way he screwed over the crack babies and their parents, just isn’t strong enough of a pay-off.

The other thing that’s becoming painfully obvious, creators Trey Parker and Matt Stone seem to be in their “doing it for themselves” phase. They’ve always done what they’ve wanted to do and pushed the boundaries of bad taste in the name of comedy. Yet, the last three episodes almost feel like you’re hanging out with people who have all these inside jokes they find hilarious, yet no one else gets it or sees the humor in it (the Slash thing being the major case in point).

Like I said from the outset, I feel bad for criticizing SOUTH PARK, because I love it death and look forward to it each week – even when it doesn’t work. Yet, I also expect it live up to at least some of its previous standards of quality. The pattern Parker and Stone use to create the episodes (one week from the time of inception to completion) seems to finally be catching up to them. They’re not giving themselves enough to time to think things through and they’re definitely not giving themselves enough time to connect-the-dots before airdate.