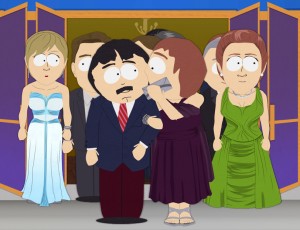 It was a given that at some point Trey Parker and Matt Stone were going to tackle their Broadway experience with BOOK OF MORMON on SOUTH PARK. The question was “when” and “how?”

The wait is finally over with “Broadway Bro Down”, the funniest episode since the midseason finale “You’re Getting Old.”

This is classic SOUTH PARK where all the elements smash into each other head on and actually have a couple of very satisfying pay-offs.

It all starts when Randy Marsh is convinced to check out the musical WICKED in a nearby town. Apparently, after watching the musical, women can’t help but give b-jobs.

Of course, Randy soon learns Broadway’s dirty little secret – writers and composers have been secretly putting in subliminal messages in Broadway plays for decades under the guise of subtext. If you listen closely, every other word is “b-job.”

After a pretty intense New York excursion with his wife Sharon (resulting in marathon B-job sessions), Randy decides to put on his own musical in SOUTH PARK. He misses the point, as always, since the subtext is rather blatant. This produces the ire of Stephen Sondheim, Elton John, Andrew Lloyd Weber and Stephen Schwartz who meet him at a Hooters to warn him that he’s crossing a line.

Yes, the Broadway greats are all “bros.”

Soon, the episode concludes with a hilarious rib on the SPIDER-MAN musical TURN OFF THE DARK and a pay-off involving Shelly’s new friend Josh (a vegan).

While the episode could have fallen apart if all it had going for it was the b-job joke, it thankfully had an abundance of other things going for it including the great Shelly subplot.

In fact, Shelly befriending Josh is one of the more innocent and touching stories SOUTH PARK has ever attempted. It’s not silly, it’s not over-the-top, it was actually, dare I say, sweet.

Of course, there’s a whole gag involving a life support jacket, and the pay-off, as I said before, is totally unexpected (and absolutely hilarious).

It was also surprising how Parker and Stone tackled their Broadway contemporaries and likely the scorn they felt when they first announced they were doing BOOK OF MORMON. And yes, there is a BOOK OF MORMON reference, but it takes to the very end to get it.

SOUTH PARK Season 15 has been a roller coaster ride. There’s been a few great episodes, and them some full-on turds. Yet, when a winner like “Broadway Bro Down” manifests its dirty little head, you can’t help but smile and feel grateful that even if Broadway can now claim Stone and Parker as one of their own, the boys haven’t forgotten where they came from – and can still provide the funny when it comes to subtext, b-jobs and life preservers.